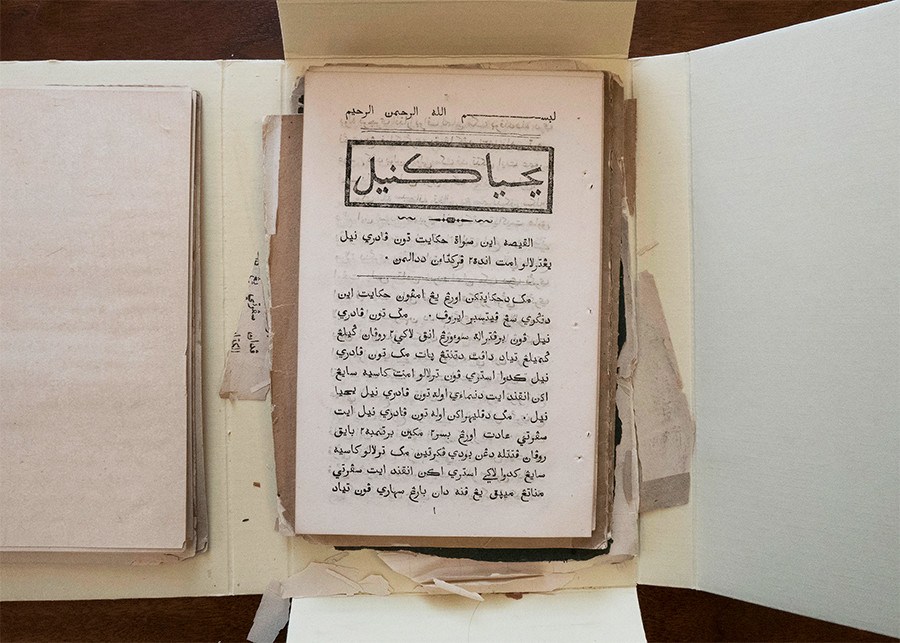 My doctoral research – which investigates the history of book production and design, and the coexistence of printing technologies, scribal practices, and calligraphic traditions – focuses on the nineteenth-century lithographic printing trade in the Malay Archipelago. I am especially interested in the activities and output of Muslim-Malay printers, many of whom operated within a 'constellation' of port towns and cities in both British and Dutch colonial spheres of influence, and had extensive transnational and regional trade and distribution networks that included indigenous, evangelical, and colonial interactions.

A fourteen-day research trip to two significant United States-based collections was made possible by the Design History Society's Student Travel Award. This visit allowed me to examine several rare Malay printed books and manuscripts held in the Asian Division at the Library of Congress (LoC), in Washington D.C. and consult several folders of missionary correspondence, lithographed, and typeset books from the ABCFM archive at the Houghton Library, Harvard University in Cambridge, Massachusetts. My work thus far has mainly concentrated on British-held collections, located variously at the British Library, the School of Oriental and African Studies, London, and the Ancient India and Iran Trust at the University of Cambridge. This field trip was the next step in diversifying missionary archival sources used in my doctoral research, and to also consider the role of American missionaries as observers, collectors, and participants in the colonial and evangelical projects, and in histories of design and printing in the Malay Archipelago.

Research examining British and Dutch colonial histories in the Archipelago (covering the contemporary political geographies of Indonesia, Malaysia and Singapore) often focus on collections located in these respective geographies, and on archival holdings located in Britain and the Netherlands, former colonial metropoles. While all are extremely rich in the breadth and depth of their collections on archival, documentational, and artefactual levels, the provenances behind the formation of these holdings are often shaped by former colonial interests and logics in the instances of British and Dutch collections; and by postcolonial national agendas, for Indonesian, Malaysian, and Singaporean collections.

Nineteenth-century American interests in the Malay Archipelago – which shaped the LoC and ABCFM collections – were arguably less politically motivated, and evangelical and scientific in nature. These impulses are exemplified in the missionaries sent by American Board of Commissioners for Foreign Missions (ABCFM) that were stationed in Singapore from 1836 to 1843, and by the United States Exploring Expedition, also known as the Wilkes Expedition, that explored the Pacific and Australasia from 1838 to 1842. The Wilkes Expedition cut across the Malay Archipelago during its return trip to the United States, and docked in Singapore between January and February 1842. There, the Singapore-based ABCFM missionary and printer Alfred North helped to assemble a collection of Bugis and Malay manuscripts and printed books to be taken back to the United States. In essence, both the LoC and ABCFM collections are two parts of the same whole: North's collection was originally deposited at the then-nascent Smithsonian Institute, before eventually being transferred to the LoC. Ian Proudfoot noted that a portion of the Malay and Bugis printed books and manuscripts, especially those relating to religious topics, was shipped from Washington D.C. to Boston, which was where the ABCFM was then headquartered. By 1942, the ABCFM archive was transferred to Harvard University, where it passed into the care of the Houghton Library.

Besides examining the design and book layout structures of Malay printed books and manuscripts at both the LoC and the ABCFM, I managed to sift through folders of ABCFM missionary correspondence, registers, and annual reports at the Houghton Library. These yielded interesting perspectives and details about the local and regional interactions between local inhabitants, expatriate missionaries, and colonial agents during the period of the ABCFM’s activity. Of note were names of non-Christian indigenous individuals that missionaries interacted with, a feature that has been noticeably absent from various records and correspondence left behind by British agents of the London Missionary Society. This striking difference yielded invaluable information that is significant for my thesis, which contains a chapter that seeks to disentangle the various streams of influence behind the introduction of early lithographic printing presses and techniques into the Archipelago, and to rehabilitate the efforts of indigenous scribes and pressmen who aided American and British missionaries in the production of early experimental lithographed books.

Funding from the Student Research Travel Grant alleviated a significant portion of the expenses that was incurred prior to, and during this trip – for this I would like to thank the Design History Society. Additionally, I would like to convey my gratitude to the following librarians and curators who provided invaluable advice and assistance: Annabel Teh Gallop at the British Library; Hong D. Ta-Moore and Tien Doan at the Asian Division, Library of Congress; and Leslie Morris and the librarians of the Houghton Library, Harvard University.

Headline image: A box of Malay typeset and lithographed Christian tracts printed by the ABCFM. The metal types for printing Malay in the Perso-Arabic script – Jawi – were likely cast and shipped over to Singapore from the British Baptist missionary enclave, type foundry, and press at Serampore, Bengal. [HD *98Miss-171]. Houghton Library, Harvard University.