Feature: Reflections on DHS 2017 Making and Unmaking the Environment (Part 3) 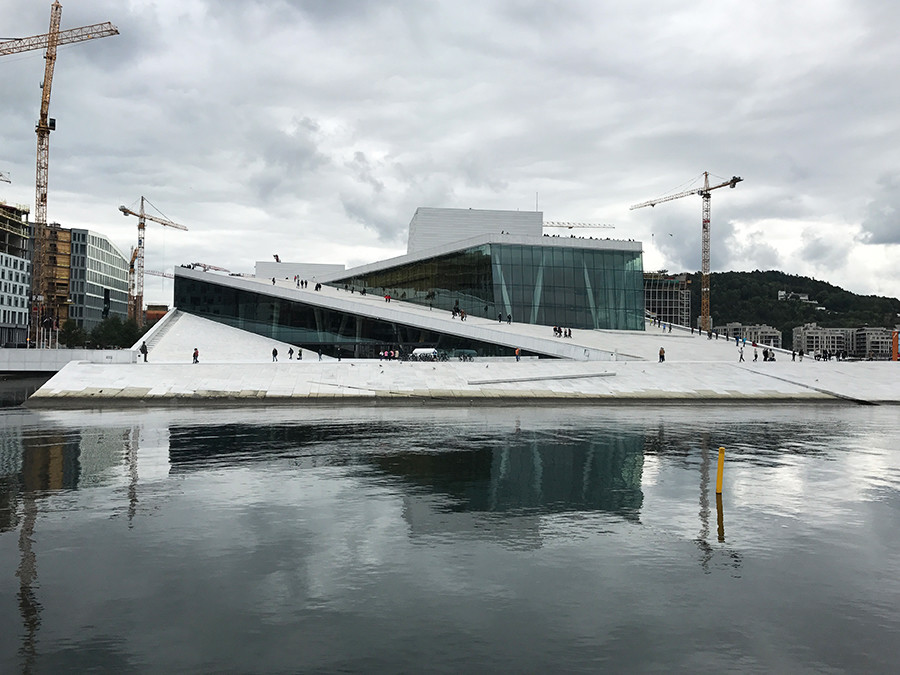 This post continues from Feature: Reflections on DHS 2017 Making and Unmaking the Environment - part 1 and part 2.

VC: On Friday 9th September, we were able to visit the Oslo Opera House for the Conference Gala Dinner. Completed in 2007, the building is one of the most distinctive in the city, perching right on the edge of the water. The Opera House is situated in the Bjørvika harbour, on the spot where Oslo was first established in the 11th century as a port, and the beginning of regeneration in the area. The Opera House faces the Akerhus Fortress, a mirror of its medieval history in spite of the slick contemporary architecture that continues to rise from the harbour.

The concept of the Opera House is to connect the city with the fjords on the other side of the bay. Decked in Italian white stone tiles, the dominant feature of the building is its glowing sloped roof, making the roof open to the public at all times of the day. The white slope meets the water, attempting to seamlessly connect with the landscape. It's somewhat successful, exaggerated by wintertime sledding down the four-storey building onto the frozen lake - though inevitably the roof is now shut off during the coldest months. From the top, you are treated to a panoramic view of the city, although the nights are comparatively less speckled with lights.

In contrast to the icy exterior, the inside is a modern take of traditional oak. The gala dinner was held in the main reception area, surrounded by views of the water, and the impressive wood spiral staircase encasing the theatre. The oak doubles up as sound absorbers in the space adding a warmth to the building and referencing the traditional wooden structures found at the Norsk Folkemuseum. The gala dinner was a great success, bringing all of our speakers and participants together for an evening of food and wine.

LC: Our final day in Oslo concluded with a quick visit to the Norsk Folkemuseum. Recommended to us by conference convenor Kjetil Fallan, as well as many other conference attendees, the Folk Museum seemed to speak to the papers discussed in the last few days. Located near the Viking Ship Museum by the waterside, it is Norway's largest museum of cultural history.

The museum was founded in 1894 and opened in 1901 by librarian and historian Hans Aall in line with Norway's objective to define itself from its neighbouring countries. It's key aim is to highlight the social, environmental and architectural past of Norway through relocated buildings and accurate reconstructions of historical structures. With a total of 160 buildings representing Norway's architectural diversity, the museum narrates the lives of different social classes and pays close attention to the working class, depicting humble portrayals of its people. The "Apartment Building" is particularly touching, as it recreates typical domestic interiors from the nineteenth-century to today, showing an Art Nouveau lounge, a teenager's bedroom, an architect's stylish flat, and the home of first generation Pakistani immigrants from 2002.

The Gol Stave Church is the main attraction of the museum, with its round base and layered roofs. Walking up the hill to the thirteenth-century church, we could hear a violin being played by one of the actresses in the yard. The museum staff are mostly dressed in period clothing and will even invite you into their fictional homes for tea and coffee. I spoke with the farmer's wife of the Rauland farmhouse opposite the Stave Church. Wearing a linen bonnet, a cream apron and a blue day dress, she told me that the house was built in 1865 and relocated in 1907 with the collections of King Oscar II, following the Gol Stave Church. She also pointed towards the irrigation system of the many houses in the area; covered with plants and a waterproofing layer in order increase growth and to act as an ecological drainage system, known today in most countries as a green roof.

With its inviting actors and violin players, the museum sets a romantic tone, but is nevertheless very informative. This pastoral approach with interactive activities for families on weekends, including a petting zoo, raises many interesting questions about the role of museums. Rather than recreating the feel of the many popular "Victorian Villages" we have in the UK, the Folk Museum shows how museum design can be inclusive, entertaining and relevant to contemporary environmental and socio-political issues.

The Fisherman by Carl Nesjar and Pablo Picasso, 1970

VC: Central Oslo has a few modernist architectural surprises as well. Some local friends recommended that I see The Fisherman, a concrete mural found on the western point of the "Y Building", one of the buildings in Oslo's Regjeringskvartalet (or government quarter). The building was designed by Erling Viksjø and completed in 1969, and is one of Oslo's modernist landmarks. In spite of this, and against protests by local and international architects and historians, it is due to be demolished in the aftermath of terrorist attacks in 2011. It will be replaced with a contemporary building that hopes to fit several ministries under one roof, but critics feel that this will likely only be a short-term solution.

The Fisherman however, is likely to be preserved, by splicing off the end piece of concrete to be kept as public art. The piece is an example of Picasso's early public work, an unusual direct transcription of his line drawings into concrete. I later read that the technical work was done by Norwegian artist Carl Nesjar, a regular collaborator of Picasso as his chosen fabricator for all of his public sculptures. The image was sandblasted from the slab of concrete, a technique that Nesjar and Viksjø came up with for creating concrete sculpture. This method, called betograve, paved the way for Nesjar's career with Picasso, which resulted in the creation of more than thirty concrete sculptures from 1958 to 1973. The Fisherman was Picasso's first attempt at monumental concrete sculpture, and where better to debut than in Nesjar's own hometown?

Also found a sneaky Picasso at Regjeringskvaralet called The Fisherman, thanks twins for the tip! 🇳🇴
A post shared by Vivien Chan (@insta_vivien) on Sep 10, 2017 at 6:26am PDT

To summarise, Oslo's urban landscape demonstrated how public spaces might contribute to the local identity of the city, and to Norway as a whole. Questions about integration into the environment came to the fore, most evident in the materials used in the buildings visited; the use of local timber, and gleaming (but Italian) white marble, reflected the surrounding environment both physically and symbolically at the Opera House; The Folksmuseum preserved a tradition of carved wooden structures and mossy roofs, buildings almost growing out of the woodland; while The Y-Building presented a distinctive concrete giant bound up in current global politics. This disengagement with its modernist past and controversial present by local government, and the shunning of the concrete structure linked to it in favour of contemporary iceberg-like monuments or relics of a forest life, perhaps marks a return to an imagined past in "nature". Oslo as a city is making and unmaking itself, whether its audience agrees with it or not. But most importantly we need to take note - by thinking about the ways we interact with both the urban and natural environment, and how we might sustain and preserve both.

We thoroughly enjoyed our time in Oslo, and we're excited to be working together to reach out to our members, both current and new. We are on Instagram and Twitter (@dhs_ambassadors), where you can find more from the conference. If you have any comments, questions, or feedback for us, about our Oslo coverage or in general, please do get in touch.