Feature: Reflections on DHS 2017 Making and Unmaking the Environment (Part 1) 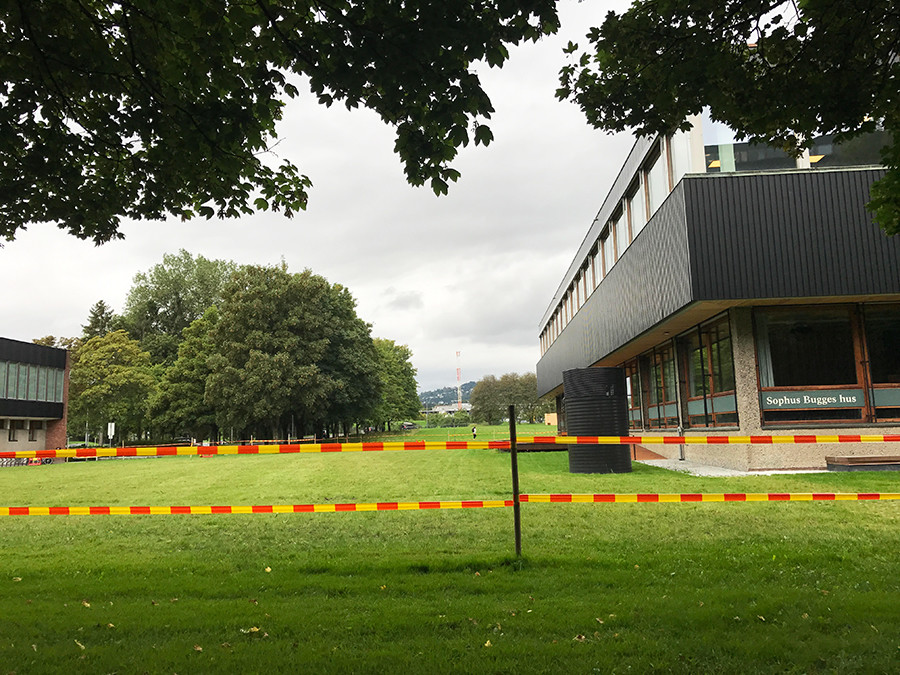 From 7-9 September, design historians from all over the world gathered in Oslo, Norway for the 2017 DHS Conference Making and Unmaking the Environment. As suggested in the call for papers, 'Design is both making and unmaking the environment. Conversely, the environment is both making and unmaking design'. The papers presented explored both perspectives and more, considering the crucial role of design and designers as both creators of devastation and of solutions, as well as the makers of the environment itself and of its representation. The conference could not have been more timely, as news of Hurricane Irma made such research all the more poignant.

This year, Lydia Caston (LC), DHS Student Officer, and Vivien Chan (VC) and Simon Spiers (SS), DHS Ambassadors, covered a selection of panels during the conference. We hoped that by using Twitter threads and in sharing images on Instagram, we could help to extend beyond the confines of the event. In this post - the first of a series - we have highlighted some of our favourite moments of the conference from days 1 and 2.

The Flat Bread Society at the Losaeter Urban Farm is a grain house designed to look like a ship ready to sail into the future. Inside, there are three wood-fired bread ovens and surrounding the structure are the planted grains. #DHS2017 #losaeter #urbanfarming #makingandunmakingtheenvironment #oslo
A post shared by DHS Ambassadors (@dhs_ambassadors) on Sep 7, 2017 at 6:32am PDT

LC: While a majority of the conference took place at the University of Oslo's Blindern campus at Sophus Bugges hus, the event opened with visits and workshops held across a number of locations in central Oslo. I joined a visit to the Losaeter Urban Farming Project, a large green space with blooming sunflowers, vegetable patches and a hen house situated near the waterside in the up and coming Bjørvika neighbourhood. The busy urban area strongly contrasted with the calm meadow of the farm, a space where local communities are invited to grow their own food and participate in farming activities.

Our visit to the Oslo urban farm served as a great introduction to the conference, affirming why the city was perfectly placed to host 'Making and Unmaking the Environment'. Norway’s broader commitments towards establishing greener spaces and reducing carbon footprint was clearly reflected in the local initiative: the three acre urban farm is a collaborative project involving designers, artists, farmers and families local to the area, and is dedicated to sustainable art, design and urban food production.

The name 'Losaeter' is a neologism created by the project's artists and designers. 'Lo' is a Norwegian river, and 'saeter' stands for a mountain farm; therefore, the designers view their initiative as a summer farm. The whole location takes inspiration from the Lo River, often recognised as the reason why Oslo is such a fertile area. Historically the Norwegian King's farm, Losaeter has reinvented the area, with the farm not only acting as a space for sustainable fruit and vegetable production, but also as a place that brings together some of Oslo's most divided communities. The soil in the area, for instance, is a mixture of various soils from different communities in Oslo, as well as compost and soil rescued from old farms. Losaeter further engages with communities through educational initiatives, offering information about how the everyday can be made more sustainable through food production and consumption, and through our daily interactions with nature. Ultimately, the designers at Losaeter hope to use their urban farm project to change perceptions of what a public space is and can be.

LC: During the second day of the conference, I attended the 'Flower Power' parallel session, chaired by DHS Conference Liaison Officer Portia Ungley. This investigated the material culture of floristry via gendered domestic spaces, Danish garden tools, and even the emotions attached to cut flowers and gift-giving.

Ilja Meijer from Vrije Universiteit, Amsterdam delivered a paper entitled 'Houseplants and Femininity in the Dutch Home', which explored how flowers as furniture affected the female role. Before the sixteenth-century, plants were rarely found in the Dutch home, as houses were not suited to their growth, but from the eighteenth-century, they were placed in 'female' domestic spaces, such as the salon and the bedroom. There was, however, a clear distinction between the way women interacted with flowers and the way men did. Men's growing interest in botany from 1880 was related to plants' medicinal effects, and house plants were rationalised by men, motivated by scientific engagements with nature. This shift made space for new structures in the home with the rising popularity of the conservatory and greenhouses.

'Design in the Garden: Questioning Gardening as Environmentalism' by Jette Lykke Jensen from the University of Southern Denmark, meanwhile, used the garden as a case study to open up wider conversations about how we approach environmental issues. Jensen focused on the late twentieth-century, demonstrating the gendered marketing of gardening tools, with male figures dominating the garden space. These tools provided a different way of interacting with and manipulating nature. Whilst some tools were manual, some were motorised and others were advanced technological versions - and even included robotic lawn mowers! In this paper, gardening as a design process was structured around nature 're-makers'.

Finally, Felicity Hall from the Royal College of Art concluded the session with her paper 'The Nature of Flowers'. Cut flowers are ephemeral, and their design and arrangement prolong their life. But how can temporary objects have such strong emotional significance? Hall chose to explore British Flowers Week, an annual event where florists are commissioned to create works with British flowers to support British growers. Hall also drew attention to supermarkets as increasingly popular florists (Marks and Spencer today, for example, offer a wedding flowers package). All in all, Hall illustrated that the different points for the spectacle and sales of flowers provide a space for consumers and producers to interact with physical nature, as well as symbolic interpretations of floristry.

VC: The parallel session 'Planning Urban Landscapes' resonated with me most, as it encapsulated the urgency of the global environmental situation. Anthony Powis gave an especially powerful introduction to the relationship between city infrastructure and water. His paper 'Making and Unmaking Wet Cities: Two Examples of London and Chennai' deconstructed the ways these two cities, with very different weather, governments and policies, work against water in their construction. A lack of understanding of the ground by policymakers, and what happens when it combines with water, causes many urban issues. Pavements, drains and water flows in the city, while seemingly mundane, can be easily overwhelmed to drastic effects if the ground continues to be treated as a line on a diagram, rather than an active space. Spectacular examples provided included the increasing devastation caused by ever more serious floods, and weaknesses creating sinkholes in roads. Such cracks break the presentation of the ground as solid, stable and unchanging aspects of the urban environment.

Evan Smith Weregeland followed with 'There's a World Going on Underground: Subterranean Urban Design', tracking the more recent interest in exploring the underground. While utopias have normally focused on surface and skyward development, there is an increasing (re)investigation of the potential of underground space. Underground infrastructure affects the surface much more than we realise, dictating where we put roads, roundabouts or even just simply garden sheds. However, radical examples of architecture placed into the earth, whether downwards or through mountainous terrain, can drastically change the way we might live, utilising the natural benefits of the earth that we currently use energy to produce, such as insulation.

Finally, Jesse O'Neill's paper 'A Garden City in Southeast Asia' unpacked the role of public urban gardens and Singapore's national identity, from its first garden city in the 1920s, to its now almost 'iconic' Gardens by the Bay (see image below). While the garden city was originally a direct opposition to 'Eastern' planning, interest in the concept resumed in the post-war period. In the 1940s and 1950s the garden city was interpreted to include ten-storey residential housing, and the garden grew to symbolise modernity and progress, alongside an increased understanding of hygiene. Utilised in political campaigns, the garden is an essential part of Singapore's nationalist rhetoric, a way of distinguishing itself from both its colonial past and its regional neighbours.

The three papers, while covering different aspects of urban landscapes, brought together some fantastic points. Policies about the ground that we build on, burrow under, and grow from are clearly essential in the making of the city and the environments that are created. They exert particular messages about how problems should be addressed, particularly in the clash against nature and the lack of surface space as populations increase. Oftentimes, these 'design solutions' just don't work: the ground is treated as a place for governments to hide their cables, as car parks and skeletons. Yet conversely, the ground has been used as a place of refuge, as bunkers and for secret tunnels for escape or protection. Perhaps instead there can be a middle ground, where the ground beneath our feet can be recognised as a space to be utilised, planned and protected.

For part 2 of this blog series, we will return to share more highlights from days 2 and 3 of the 'Making and Unmaking the Environment' conference, and to offer additional observations from our trip to Oslo. Watch this space!