Parisa Heidari: 'The role of women in the development of endowment in Islamic lands – A case study: women acquaintances in Safavid and Ottoman rule' 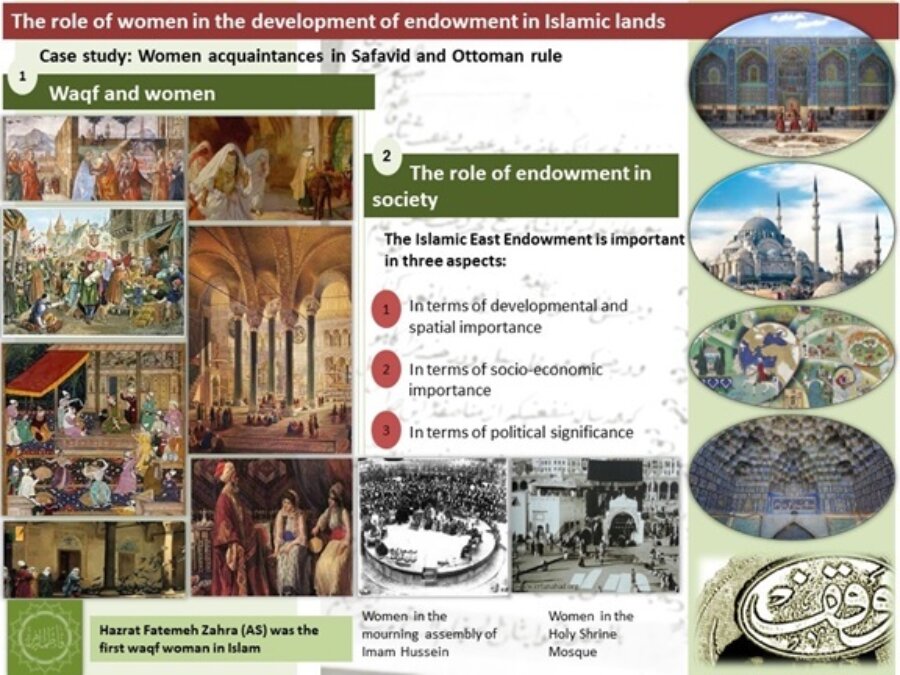 By referring to cultural heritage sources, based on which the effects of women's presence in society can be observed, documents and endowments, in addition to their antiquity, illuminate the dark corners of history in the eyes of the researcher. Among these documents, endowments have a special place.

Waqf and women
As seen in the left section of the slide, Waqf is an expression/proposal of the presence of women in different fields: social, cultural and economic. In this way we can see the effects of the presence of women in society.
Examining the activities of women (here endowments) on the one hand clarifies their situation in each period, and, on the other hand, offers an overview of the political, social and economic situation of that period, because the presence of more women in any society is a measure of evolvement.
Great growth of endowments occurs in the Safavid and Ottoman periods. We can see that the women of the capital have paid much care to the social, cultural and religious issues of their time. They have played an important role in meeting the needs and necessities of society, as well as promoting the Islamic religion and the Shiite culture. They were important to the city to this extent and even more so because of the presence of endowments as important social and economic institutions.
It is only in the Islamic period that a free legal personality was created for women in the light of the high teachings of Islam. From this period onwards, a large number of women made the present by finding an independent legal personality. Women are able to make endowments that have legal ownership of their property, therefore, the possibility of these women belonging to the upper strata of society is very high.

The role of endowment (Waqf) in society
Waqf was important for creating urban substructures such as mosques, baths, schools or shops as a part-time and full-time job maker. We can see some pictures of Ottoman and Safavid endowment buildings to the right of the slide.
The establishment of endowment was important for the social, cultural and economic geography of the Islamic East and especially its cities in three aspects:

The peak of women's power in Safavid and Ottoman
In Esfahan, (Safavid), due to its political and economic matters, it was considered by Safavid kings: out of 59 endowments of Isfahan Endowment Office, 17 are reserved for women. That is, about one third of the endowments are related to Safavid women, and the most interesting part of it is related to schools, during this period, the making of endowed buildings is developed.

In Ottoman society, the only place women could manage was endowments. About thirty percent of the endowments were erected in the 11th century, which is considered the period of "women's reign" in the Ottoman Empire, because the majority of these acquaintances (90%) are the wives, daughters and mothers of the rulers and the upper Ottoman class.

Among these benefactors are Maryam Begum, Zubeida Begum, the mother Mah Peykar and Adeleh Sultan in Istanbul. In addition to perpetuating their name and works, they did much charitable and blessing work to train scholars and thinkers in their built schools.

The process of urbanization on a large scale dates back to the Ottoman and Safavid eras. The growth of cities in the Ottoman and Safavid territories from the sixteenth to the eighteenth century AD is almost inconceivable without the institution of endowment.
The "charity handout" is the basis for the foundation and development of Ottoman Turkish cities: just as the foundations of Ottoman cities were laid with charity, so their development took place in the shadow of this charity.

For example, let's look at the movement and how to turn it into a utopia. Orkhan Ghazi built a mansion in the late 1330s. It consisted of charities such as the Grand Mosque, restaurant, teacher, bath and caravanserai. This complex was the liveliest centre in the city and still retains this attribute today. The story of Edirne becoming a Turkish city is no different. All Ottoman cities were created and developed in this way and in the spirit of charity.

With the expansion of the endowment, women also have a greater share in this development of the making of endowed buildings. It can be claimed that endowments in each period have had a great impact on the growth of the economy and culture of society.

What were the specific features of the women's endowment, in the type of building or function or decoration?
According to Figueroa, the Spanish legate to the court of Shah Abbas I, rich women of the Safavid era were more placeable than men in good deeds. Many caravanserais and public buildings were built from the charity of women, who were usually poorer than men.
These cases can be seen in the endowment documents of women belonging to the upper social classes, as we can see at the bottom of this slide, with the beautiful literary introduction of the endowment letter, using different titles for upper class women in the text and the existence of their own seals. The social status of the acquaintances can be understood by studying the formal features of the original document, such as paper, line and appearance of the document.

The cases in which women have played a role in building endowments can be divided into 4 groups:

1. Participation in the construction of mosques

Tips in the text of endowment letters
One of the most valid documents that can be cited to prove the presence of women in the architectural art of this period are endowments.

According to the latest statistics from the Endowment Office, there are 4,000 women, who have donated riches. The connection of the religious identity has been one of the issues considered in the endowment.

In Isfahan, a significant part of the endowment expenses belongs to prayer meetings and matters related to Imam Hussein (AS).

In the Ottoman government, most of these services were in the holy land of Mecca and Medina and for the people there. In the Ottoman capital, Istanbul, the devotion to the poor of the two shrines was greater.

As we note in the left section of the slide, the type of real state endowment of endowment letters of Safavid women in Isfahan can be classified into four groups:
1. Agricultural lands, gardens and trees
2. Aqueducts and water quotas for irrigating farms and gardens
3. Movable assets including utensils, clothes, mattresses and ihram
4. Shop and house

According to the information extracted from the endowment letters, the type of real state of Ottoman women's endowment letters in Istanbul can be classified into four groups:
1. Village and farm
2. Camels and sheep
3. Home and shop
4. Gold, coins and jewellery

More Details
More examples of other references that can be relied upon to research this topic more can be seen on the right of the slide.