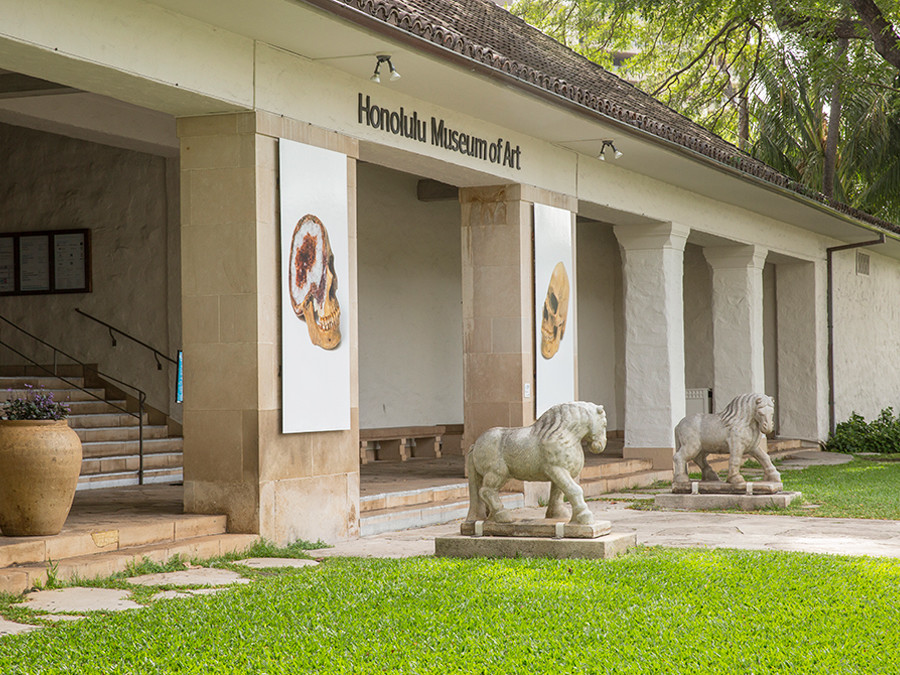 My research trip to Honolulu, Hawai'i, USA, assisted by the financial generosity of the Design History Society Student Travel Award, coincided with an erupting volcano on the Big Island of Hawai'i (Honolulu is located on the island of Oahu). Despite some initial uncertainty as to whether Honolulu may have been affected, I was fortunate enough to visit the island that would have important findings to the trajectory of my project.

'Fragments and Borders: Reconstructing Post-War Korean Identity Through Patchwork' examines the Korean wrapping cloth, pojagi, and specifically, its patchwork iteration, chogakbo, as objects that reveal the polyphonic voices of Korean women. Prior to Honolulu, I had been conducting research in South Korea, observing handicrafts in museums and galleries throughout Seoul and via its makers, specifically with Chunghie Lee and her Korea Bojagi Forum. The questions of my initial proposal asked: what is revealed by these patchworks? What is the relationship to their maker? How are these textiles prescribed and inscribed as signifiers of identity? What does the process of making and presenting these textiles reveal about constructing Korean identity? What does absence articulate? Importantly, my research was to consider the construction of identity through both national and transnational lenses, which led me to Honolulu.

According to the 2010 US Census, Hawai'i is the most densely populated state of the Korean diaspora in the US. This community, along with the military history of the Pearl Harbour attacks during World War II, foregrounded the state as an important geographical site of examining objects in the context of Korean-American-Japanese transnational relationships. Through my research on the island I discovered that not only is the Korean population highly concentrated, but it has a long, rooted history, tracing back to the early 1900s with the migration of Korean labourers, recruited to work on the sugar plantations. In addition, the historical relationship within this diasporic community paralleled the geopolitical interactions of Korea-Japan-America as an entanglement of subjugation, colonial identification and, later, Americanisation.

With this history in mind, I began my research at the Honolulu Museum of Art, a private museum that was founded in 1927 by Anne Rice Cooke. Her and her husband, Charles Montague Cooke, both prominent members of missionary families, collected art and design objects, and built the house that would eventually become the museum today. The history of Korean objects in Western institutions collected by religious missionaries has been noticeable in my research thus far, observed in the acquisitions notes of objects in the American Museum of Natural History and the Fitzwilliam Museum, calling for the critical questioning of ethnographic representations. The collection of textiles at the Honolulu Museum of Art included eight pieces of pojagi and two pieces of Japanese boro (a textile patchwork tradition formed from the process of mending and repair). My examination of these objects was made possible by the textile curator, Sara Oka, whose generous time and knowledge facilitated, not only a better understanding of the objects individually, but a useful understanding of the objects in relation to the collection, and by extension, the city of Honolulu. Our conversations traversed her own professional history within the institution, the practicality of presenting and exhibiting objects, transnational relationships between fabrics, and more, all of which helped me to understand each patchwork within the wider language of textile history.

There were two objects of particular interest that deviated in form from my findings thus far, and therefore elicited problems for the narrative of Korean patchwork I had previously formed. Both of the pieces had no artist label, which is commonplace, and contributes to the history of pojagi as material culture representative of forgotten female voices. The first object (see above) was dated to the mid-twentieth-century, and made of ramie, hemp, natural dyes, plainly woven with hand stitching, and gekki construction (defined as the triple stitching technique used to create stiff and strong linear seams). The patterns of chogakbo that I had previously examined all exhibited a sense of compositional balance, whether through colour palette or shape placement. Pieces may be fragmented, but the compositional whole evoked a sense of unity within its multiplicity. Composed of five different colours of rectangular shapes, this work had an irregular balance of colour and was an example of a pattern deviation that I had not previously observed.

The second object (above) was peculiar in its areas of visible mending and wear, as was its material. Made from faded teal hand-woven coarse hemp, this object had patches that had been sewn over the original fabric, marked by a difference of colour. Halfway between the centre and the finished edge there was a remarkably warped perimeter, which could be observed as wear from practical use. Oka reflected on how the fabric reminded her of Japanese kaya mosquito netting.

In the remainder of my week, I spent time examining photographic archives in both the Honolulu Museum of Art Library, assisted by the archivist Dawn Sueoka and the librarians, Sachiyo Kawaiaea and her assistant Ellie Kim, and the Center for Korean Studies at the University of Hawai'i. Michael Macmillian, the publication manager there, aided my search through several collections, including the Evelyn McCune collection, which was particularly interesting as a reference to post-Korean war, Korean-American relations.

This trip to Honolulu was informative, enriching and valuable to my research, and I am grateful for the support offered by the Design History Society, as well as the time and insight that Sara Oka and the staff at the Honolulu Museum of Art (including the director, Sean O’Harrow), and the Center for Korean Studies provided.