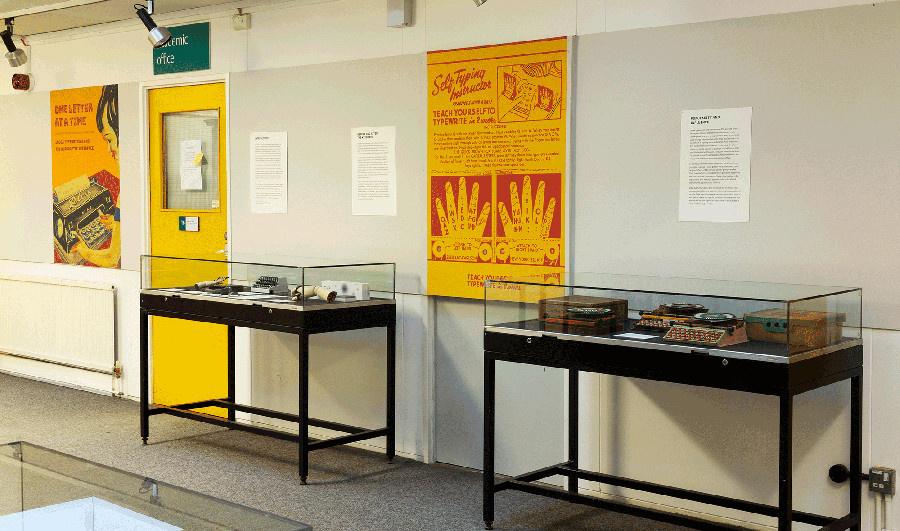 Facilitated by a generous grant from the Design History Society, my research towards the exhibition 'Typing in tongues: writing machines around the world' examines how technological modernity and literacy were mediated globally through writing machines - that is, through everyday technologies of inscription and duplication. In picturing writing machines in the pre-digital age, what comes to mind most readily is the compact standard typewriter, a familiar keyboard, and monospaced Latin alphabet. But what did writing machines look like for Hindi or Tamil, how did they work for Arabic or Hebrew, Mongolian or Japanese, for inscribing musical notations, or an alphabet for the blind? My project situates the quintessential twentieth-century writing machine, the mechanical typewriter, as well as its less-well-known competitors - a broad range of personal text-composing devices - within a rarely seen diversity of design for languages, interactions, and interfaces.

Writing machines, their printed output, their design documentation, and publicity ephemera constitute a rich material encounter with the products of multilingual, multifaceted design for reading and writing before the digital era. It offers a glimpse into the broad spectrum of design ingenuity behind the production of textual matter in different writing systems, and new insights into the creativity and resourcefulness, not only of designers, innovators, and manufacturers, but also that of adapters and users of writing machines around the world. The design and manufacture of writing and composing machines involved not just technical expertise and a capacity for innovation, but it also demanded a remarkable measure of collaborative commercial acumen in positioning and popularising new technologies in potentially large and profitable markets. My research towards the exhibition elicits the vital history of this transnational enterprise through visual and material traces surviving in the records of manufacturing companies, institutional archives, and private collections worldwide.

The research focuses on a particularly significant historical moment of transition in text production when 'the printed word' began to move out of print shops and started making its way into non-specialist independent offices and household settings. Writing machines transformed the way people engaged with the material realities of text - not only in the Latin alphabet but also in their local language and script - defining the ways in which reading, writing, and communication were carried out on a day-to-day basis in linguistically diverse regions of the world. My research aims to examine and situate the design processes behind writing machines as a critical site of mediation through which new connections between language/script, literacy, technology, and modernisation were forged and consolidated.

The introduction of writing machines for everyday use also reconfigured textual practices in a number of scripts of the world. This process of change can be reconstructed not only from advertisements and other publicity material, but also from operating manuals, keyboard arrangement charts, character specimens, speed-training manuals, and self-improvement guides for users of the machines. Small-scale technologies and 'personal' tools in a global context have remained largely at the periphery of critical scholarship in the history of technology, as well as in studies of visual and print cultures - an aspect that the exhibition seeks to address by highlighting their significance and lasting influence.

Almost simultaneously with their commercialisation in the late nineteenth-century, typewriters posited an apparatus, as well as a practice, that could be extended - at least in theory - to any language, any writing system of the world. Soon, typewriting manuals for languages as diverse as Latin, Arabic, Hebrew, Thai, Hindi, and several others, began to outline a universalist framework. This was a framework to move beyond the particularity of scribal practices in different parts of the world, towards a global method of 'text input', and a global document genre of the typewritten manuscript.

Coinciding with the rise of the modern office and multinational corporations as both spaces and forces of globalisation, typewriting occupied a crucial role in inscribing and reifying transnational imaginaries of communication. Not only could the apparatus be imagined to be the same across languages and scripts, the posture, furniture, office space, workplace hierarchies, and gender relations too could be extended across cultural boundaries. A typewritten document in any language could be characterised as an artefact defined by a 'modern' machine, rather than writing tools loaded with cultural/aesthetic traditions. Unlike previous paradigms of manuscript practices that were both dependent on and represented skilled practice in a geographically particular sense, typewriting presented a discourse of globalised communication, firstly through its mechanism. Any 'modern language' (but really the script), it claimed, would have to be adaptable on the keyboard. If not, the language and writing system itself needed to be 'modernised'. Secondly, given the limited means and options available on the standard typewriter, the discourse of global practice extended to the layout and organisation of information, and the composition of the typewritten document itself.

How did manuals and instruction guides for typewriting and text composition in multiple languages, across different regions of the world, negotiate this discourse? What links and breakages occurred in the process, at the level of everyday practice, materiality, design, and communication? Typewritten documents are possibly the most ubiquitous material forms of printed ephemera and archived matter from the twentieth-century. They can be found in company records and official communications, embodying impersonal memoranda, as well as personal letters, slapdash dispatches and writerly manuscripts. Extending across specialist and popular realms, typewritten documents and typewriting practice represent a relatively unexplored area of considerable significance. Thanks to the support of the Design History Society, the exhibition 'Typing in tongues: writing machines around the world' will shed new light on the global reach of these machines and the influence they have wielded in visual and material cultures.