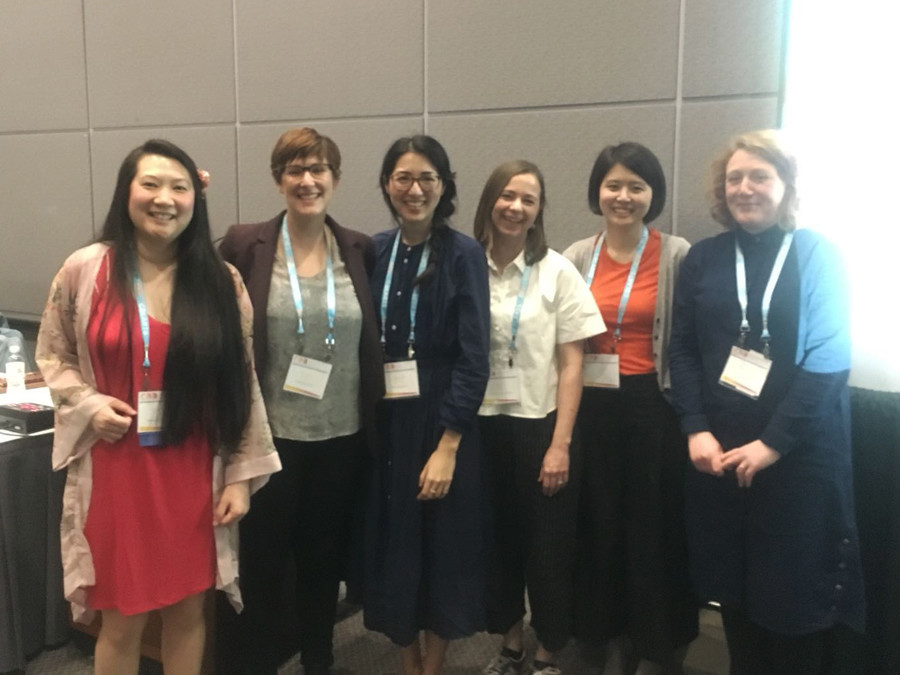 The College Arts Association's (CAA) 106th Annual Conference was held last month in Los Angeles, and with over 800 paper and session proposals, 200 meetings and events, 300 sessions delivered over four days by 1400 members, and over 4000 attendees, it is said to be the largest art and design history and visual culture conference in North America. Moreover, 2018 is the second year in which the Design History Society was to partake in the conference as a CAA-affiliated society panel, and it was this that we had the privilege to chair together.

Stemming from a conversation about our own research areas of 1980s Bubble Economy Japan and Socialist Czechoslovakia, our panel aimed to investigate the concept of being on the periphery, the necessity of having to negotiate internationalism itself, and the assertion of agencies formed in its shadow. Furthermore, although design history, as the interrogation of visual and material objects and systems, has recently focused on the importance of transnational flows of ideas, systems and cultures (Adamson, Riello, Teasley, 2011), this is not a neutral endeavour. What has not been addressed is, at these points of juncture, what happens to the narratives felt to be at the periphery, and how do they articulate their own relationships of agency and narrative alongside the influence of an often more dominant international? Through exploring these questions, we aimed to contribute towards a greater understanding of what it means to negotiate one's own narrative in relation to dominance, and in doing so, work towards liberating what it means to own identity when constructed in the shadow of globalisation.

After receiving a fascinating range of proposals from researchers from all over the world, we selected four candidates. They offered a varied set of responses to the theme of the panel through addressing questions of agency within dominating structures of craft and design, across multiple media and geographies. Carrie Cushman, a former Fulbright and Mellon Humanities award holder, presented her current Columbia University doctoral research on portrayals of modern Japanese architecture. Her paper focused on alternative design surveys in 1970s urban Japan, questioning the language of photographic representation. Magali An-Berthon, a former Fulbright scholar and research fellow at the Cooper Hewitt National Design Museum, now at the Royal College of Art, discussed her investigation of the Institute for Khmer Traditional Textiles, founded by Japanese pioneer Kikuo Morimoto in Cambodia in 1996. Ruth Clifford, a recipient of Nottingham Trent University's Vice Chancellor's scholarship, looked at design and business education for artisans in Kutch, Western India, focussing specifically on weavers. Finally, Di Liu, a graduate of the V&A/Royal College of Art's History of Design Programme and currently working in the research department at the Asia Art Archive in Hong Kong, addressed whether Ming chairs can be read as subversions or testimonies to western design.

A wide range of resonances between the papers became apparent when delivered at the conference. Together they addressed areas such as the use of traditional techniques, motifs and technologies to support transitioning cultural identity in relation to ideas of 'invented tradition' (Hobsbawm: 1983) and the re-contextualisation of the local in order to compete in global markets. There were overlapping interests in colonial heritage and shifts in political power, particularly in relation to international relationships to hegemonic (often capitalist and western) standards of 'good design' or 'authentic craft'. The latter ideals were explored as a complex process of both alignment and departure. Each paper ultimately called for the need to revisit the terms that surround how we describe, represent and document craft and design processes in locations still considered to some degree 'peripheral' from centred narratives. Particular to this was the question of how these are inherited or disseminated via pedagogical structures. At play in each panellist's research were tensions between local agency and imposed definitions, bringing new perspectives to the position of everyday practice, and how makers and designers respond to the parameters of temporal and political ownership.

The panel itself was well attended, with an international audience of around 25 members who engaged the panellists with lively questions and debate, and with many conversations continuing long after the successful conclusion of the panel. There was also interest outside the conference itself, which included the panel trending on social media, and the Royal College of Art in London published a news item about us that week. Nottingham Trent University also tweeted about the event and more recently published a news article online about the panel.

Continuing the momentum of this theme, Nottingham Trent University has awarded Hui-Ying with a grant to host a networking event with the panellists and other invited participants from NTU, the Royal College of Art, Victoria and Albert Museum, and the Design History Society on its campus. Titled 'Renegotiating the Narrative in Global Design Histories', this event has been supported by the strategic NTU Global Heritage Research Fund and will take place from 6-7 June 2018. Projected outcomes include journal publications and the exploration of other potential avenues for research.

In concluding this review, we would like to extend our heartfelt thanks to the Design History Society for supporting our panel for this year's CAA conference, that not only includes awarding us the privilege of determining the panel theme and chairing, but also in its support of our panellists, some of whom were recipients of its generosity in attending. Through its support, the DHS has enabled us to contribute towards the growing area of global design history, and we very much look forward to our next steps in furthering this exciting area of research and contributing to the ongoing narratives found therein.