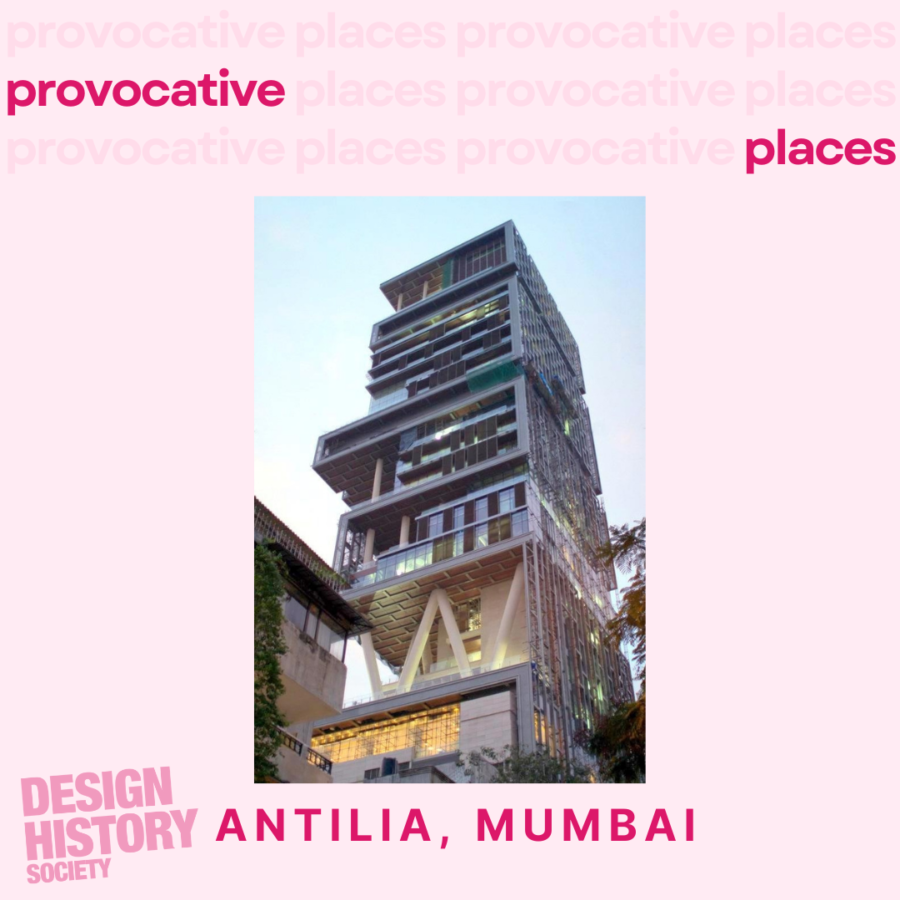 Welcome to the next in our Provocative Places and Objects series, in which our Ambassadors look at places and spaces that challenge and confront us as design historians. This month, Alexandra Banister looks at Antilia, the private residence of the Ambani family in Mumbai, and issues of the wealth divide as articulated through architecture.

Antilia, named after the legendary island, is one of the world’s largest and most expensive private residences. Located on the Altamount Road, one of the top ten most expensive streets in the world, the tower is the private residence of the Indian billionaire Mukesh Ambani and his family. The home is considered to have cost around $2 billion to build for Ambani, who made his $29 billion fortune as CEO of Reliance Industries, a conglomerate founded by his father, whose diverse business interests include petroleum and petrochemicals, telecommunications and mass media, and textiles.

Designed by two American architecture firms, Perkins & Will and Hirsch Bedner Associates, the designs for Antilia took seven years to become a reality. The home takes the form of a 400,000 square foot, 27-storey tower reaching 175 metres in height. It has been designed to withstand the seismic effects of an earthquake with a magnitude of 8 on the Richter scale. It contains 3 helipads, a 6-floor parking lot to accommodate 170 cars, 9 high-speed lifts, 3 swimming pools, a spa, a theatre seating up to 50 people, hanging gardens, a ballroom, and accommodation for around 600 members of staff. The architectural design factors in the movement of the sun throughout the day and makes a focal point of the views of the Arabian Sea from the upper floors. The interior is decorated using traditional Indian crafts and rare materials, including wood, marble, mother of pearl, and crystal.

The scale of luxury in the design of Antilia has provoked much criticism on local, national, and international levels. In the vicinity, many have complained about the helipads violating local noise laws. Controversy also surrounded the plot of land on which the tower was built. The site was sold to Ambani’s company by a charity, on the condition that it be used for the purpose of education for underprivileged children. The sale of the plot for $2.8 million, when its market value at the time was around $20 million, prompted a public interest ligation filing. which was eventually taken to the Supreme Court of India. But the provocative nature of Antilia is made most clear in the way that it architecturally articulates the problem of the vast wealth divide in India. In 2020, the Times of India
reported that 42% of Mumbai’s population, around 9 million people, lived in slums, whilst 57% of the city’s families live in one room homes. Further reports indicate that well-paid middle-class professionals also find it difficult to afford housing in the city.

In the growing climate of hunger and poverty, exacerbated by the Covid pandemic, the disparity of wealth that opulent design highlights has been made all the more relevant. How can architecture and the design of the built environment work to lessen the wealth divide? How do we shift the focus so that design benefits the many rather than the few? Should more measures be put in place to limit luxury construction and encourage social housing? And at what point does design overstep the mark from the luxuriously beautiful to the immorally decadent?