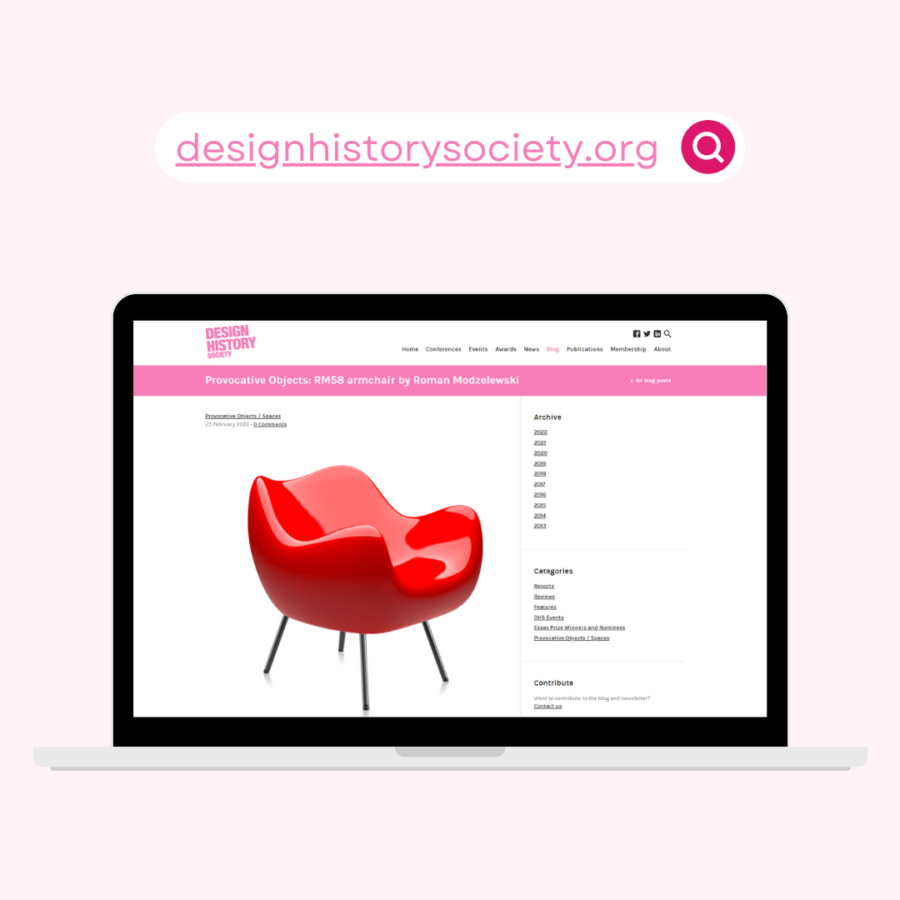 The RM58 armchair was designed by Roman Modzelewski in 1958. Referred to by some as the Polish Charles Eames, Modzelewski (1912 – 1997) was a Polish painter, sculptor, designer and teacher who experimented with, at the time, materials unknown in Poland. His eagerness to experiment with new materials places the RM58 armchair at the crossroads of international modernism and its more local experiences. The RM58 armchair is made from polyester-glass laminate and it was one of the earliest Polish examples of this kind of manufacturing and material use. It was highly acclaimed by people such as Le Corbusier and a French manufacturer was interested in manufacturing it. Unfortunately, due to the political situation at the time in Poland, the government didn’t agree for this to happen. It also didn’t get the widespread recognition of the contemporary Polish public due to it being seen as too modern. However, Roman Modzelewski patented the design of the RM58 armchair in 1961 and in the following years the armchair could be made-to-order. It wasn’t until five decades later though that this piece of furniture was put into production by a Polish company VZOR. In 2009, Victoria and Albert Museum acquired one of the earliest prototypes of the RM58 armchair for their collection, and this emphasised its importance within the history of design.

So what was Poland’s political situation at the time that prevented the production of the RM58 armchair and consequently a more international spread of this now-classic Polish design? In 1949, socialist realism was introduced in Poland which meant that designers and artists had to ensure that their designs are relating to historical styles which the viewers were used to, such as folk arts and crafts. However, Joseph Stalin’s death in 1953 was followed by the Khrushchev Thaw which meant a softening of the socialist realist norms in art and design. Artists and designers had more freedom to experiment and explore new styles, techniques and materials. As good as this sounds, it didn’t give designers the complete freedom that they desired. The designs still needed to be approved by various people in power and the ultimate decisions were made by the government.

The RM58 armchair is not the only design whose production was hindered by Poland's communist regime. Other designs, such as the H106 chair designed by Edmund Homa in 1967 were only made as a prototype and later forgotten about. In recent years there has been a renewed interest in Polish design history, especially in pieces from the time of the Polish People’s Republic (1952 – 1989). Companies such as VZOR are releasing re-editions of Polish designs that for decades were unknown and are now being introduced to the contemporary public.

If the production of the RM58 armchair was encouraged and went ahead, what would this have meant for Polish design and designers? Would this have altered the way Polish design is perceived today on an international scene? We can only wonder, but thanks to companies such as VZOR, designs that have been hidden by the communist regime are being re-discovered and their histories, as well as their designers’, are brought back to life. A new generation of Polish and international audiences are seeing what previous generations had to miss out on.

Please feel free to leave comments in response to this post below. If you would like to contribute a blog post for this series, please contact the DHS Administrator: designhistorysociety@gmail.com. We welcome posts on any place or space from any era, anywhere in the world