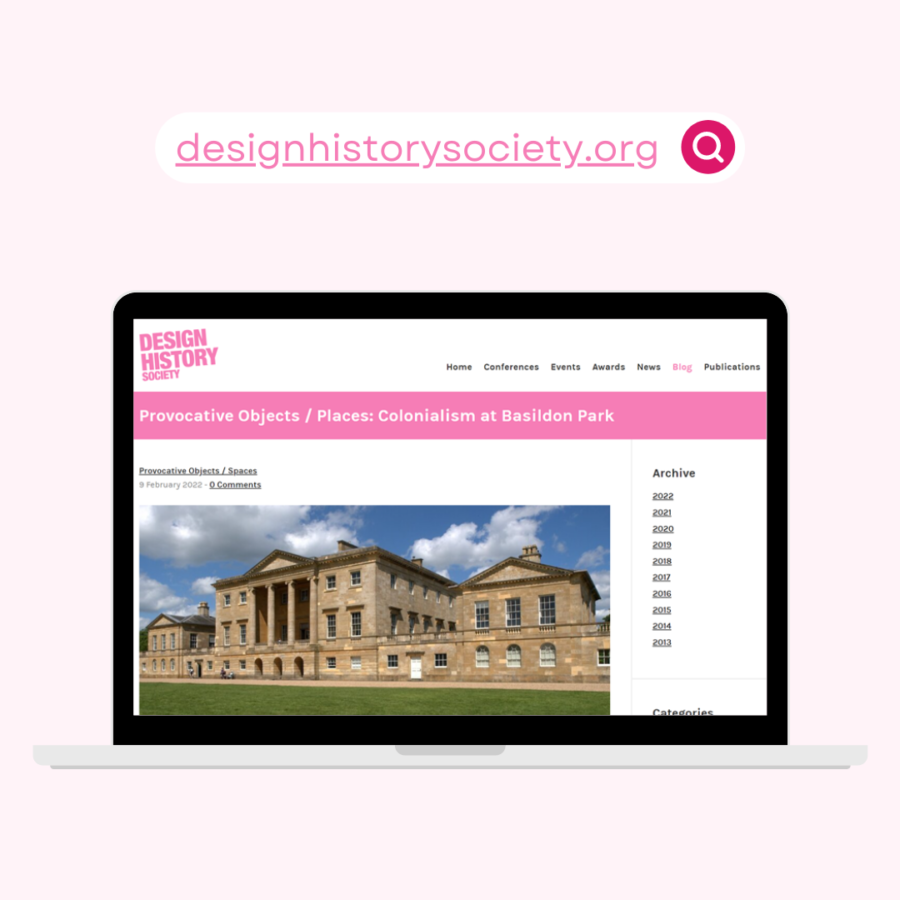 Welcome to the first of the new DHS blog series initiated by the DHS Ambassadors, Alexandra Banister and Wiktoria Kijowska in which they offer a critical perspective on places and spaces that challenge and confront us as design historians. This Wednesday Alexandra Banister discusses issues of colonialism at Basildon Park in Berkshire.

Construction of Basildon Park began in 1771 to the designs of the architect John Carr under the patronage of Francis Skyes. The building was designed to provide Sykes with a home befitting of his new status as a member of the social elite, to showcase his large fortune, and to provide him a base from which to acquire political influence. Berkshire was an increasingly popular area for the rich to reside, being a short distance from their social and business lives in London.

Carr’s design was heavily influenced by the work of the Italian Renaissance architect Andrea Palladio. The principal West Front took cues from Palladio in its use of Ionic columns and arches to form a central portico, and in the spatial configuration of a main block flanked either side by smaller pavilions. The central block contained three floors of principal rooms; their status indicated by the size of their windows. The small windows on the ground and upper floors denoted their role as domestic spaces, with the tall windows on the first floor piano nobile signalling entertaining spaces.

Sykes, the son of a Yorkshire farmer, left England to make his money working for the East India Company in 1751. He started at the Cossimbazar factory in Bengal, rising to the chief of the factory, before serving as Resident of Murshidabad. His work during this time as Bengali Tax Collector was later investigated by Parliament and Sykes was found to have levied unjust taxes. Several years later, when serving as MP for Wallingford, further allegations of corruption in his constituency were investigated. The East India Company were one of the most powerful companies of the time, whose work in India and Asia drove the expansion of the British Empire. The EIC annexed and taxed Indian territories, looted treasures, and engaged in trade of opium, the farming of which subsequently caused widespread famine. The money Sykes made and subsequently spent on Basildon Park is just one example of Indian capital being used to finance the building or expansion of stately homes in the UK.

Over the past decade, numerous academic reports and surveys by heritage organisations have highlighted this darker side of architectural and social history. Such buildings as Basildon Park are considered national treasures and are still visited today: their extravagant designs tell us much about the ways in which the East India Company and the British Empire grew and profited. But these buildings also represent historic cases of the exploitation, cultural theft, and the disparity of wealth. How do we challenge and reclaim the narrative around colonialism? Is it enough for heritage organisations to reinterpret such contested sites, and is it ever possible to tell the full story of how or why a building came to be? How do we come to terms with these murkier moments of history?

How do we ensure that all buildings with dark pasts equally confront these contentious issues and are committed to educating audiences? Does Basildon Park represent our collective past and does it have a future value?