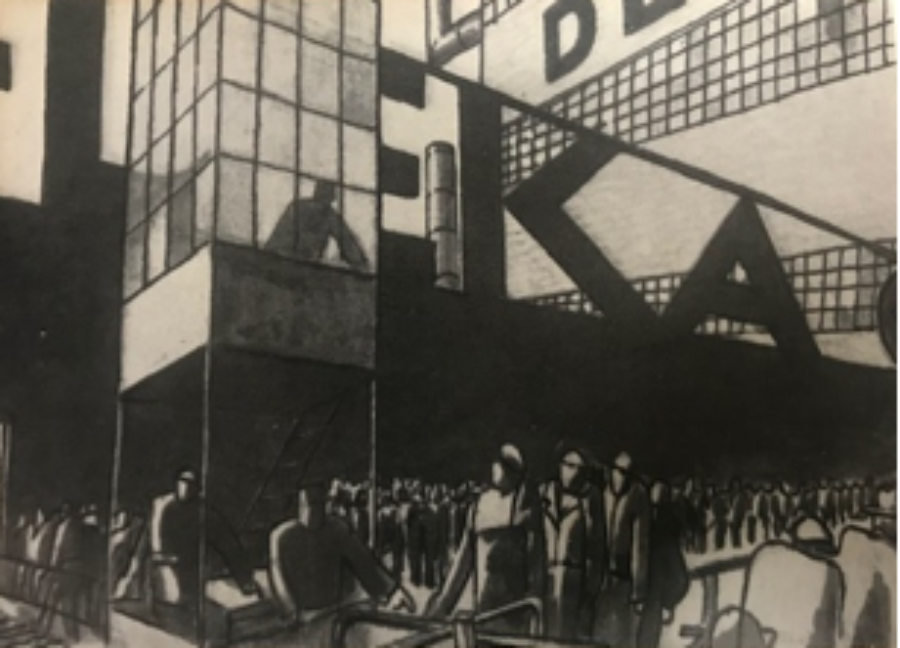 Thanks to the generous support of the Design History Society, I was able to undertake a second trip to Moscow to conduct archival research for my doctoral thesis, which examines the role of set designers (kino-khudozhniki) in early Russian and Soviet cinema from the birth of the national industry in 1907 up to the advent of sound technology at the beginning of the 1930s. During my first research trip in April and May 2018, I was able to examine a broad range of documents relating to the working practice of cinema set designers, including studio contracts, film-makers’ memoirs, articles on set design in the contemporary cinema press and early set design manuals, housed at the Russian State Archive of Literature and Arts (RGALI) (see my 2018 Student Travel Award Report). These documents revealed how available technology, the studio environment and collaborative partnerships, as much as the creative visions of individuals, shaped cinema design aesthetics. They also shed light on how film-makers’ perceptions of set design as an artistic practice evolved across the 1910s and 1920s and became the basis for a conference paper, titled ‘From the Kino-dekorator to the Kino-arkhitektor: Perceptions of Set Design in Early Russian Cinema’, which I presented in June this year at the Building-Object/Design-Architecture: Exploring Interconnections conference, jointly hosted by the Design History Society, the European Architectural Network and the Architecture Space and Society Centre (Birkbeck, University of London). Following feedback from the conference, I am at present adapting the conference paper into an article.

Armed with a wealth of documents relating to the practice of cinema set design from my first visit to Moscow, during my second research trip I focussed on viewing films held at the Gosfil´mofond State Film Archive in Belye Stolby, near Moscow. Gosfil´mofond holds copies of all extant films from the Pre-Revolutionary and Soviet periods, many of which cannot be accessed elsewhere. A number of the films I viewed, although previously not considered significant in scholarship on Russian and Soviet cinema, proved to be remarkable from a design perspective. In particular, I was fortunate enough to be able to watch the historical revolutionary drama Dvorets i krepost´ (The Palace and the Fortress), which the archive had recently restored and made accessible to visiting researchers. Produced in 1923, Dvorets i krepost´ was the first Soviet film to be exported abroad, and utilised set design and architecture as a tactic to promote the artistic quality of Soviet cinema to a Western market. Following the tradition in late-Imperial cinema of employing established artists as set designers to elevate the artistic quality of films, the Sevzapkino studio commissioned the architect Vladimir Shchuko – known for his work on the Lenin Library and later the Moscow Metro – to oversee the artistic side of Dvorets i krepost´. As the formalist critic Viktor Shklovskii noted on the film’s release, the way in which Shchuko intercut scenes of prison cells at the Petropavlosk fortress with those set in the Tsar’s court of the Winter Palace was novel and heightened the sense of conflict portrayed in the film. The use of different material environments to create visual contrast provided an alternative approach to other editing techniques promoted by such film-makers as Dziga Vertov and Sergei Eizenshtein during the 1920s. 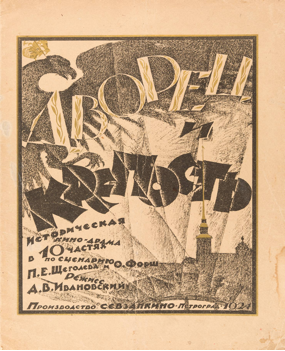 Vladimir Stenberg, poster design for Dvorets i krepost´ (The Palace and Fortress). 1924. Lithograph.

Time spent in Moscow also offered me an opportunity to develop professional contacts with other scholars and specialists working in my field. I am grateful to both Aleksandr Lavrent´ev, the grandson of Aleksandr Rodchenko, and to Liudmila Miasnikova, the daughter of the prominent set designer Gennadii Miasnikov, for sharing with me their time, knowledge and sources relating to Rodchenko’s and Miasnikov’s work on set design. Gosfil´mofond staff introduced me to Kristina Iur´eva, the Curator of the Fine Art Department (Izobrazitelnyi fond) of the Muzei Kino in Moscow. She kindly granted me access to the Museum’s collection of Vladimir Egorov’s set design sketches for films of the late 1920s and 1930s. With their stark contrasts of light and shadow and their framing from low or high vantage points, these sketches demonstrate how Egorov experimented with lighting techniques and camera angles to develop an approach to set design that differed from the theatre and that was specific to cinema. Considering these sketches alongside Egorov’s articles and memoirs, which I consulted during my first research trip, reveals how he understood the film screen as a pictorial surface and drew on conventions from the tradition of painting to heighten the visual impact of films. 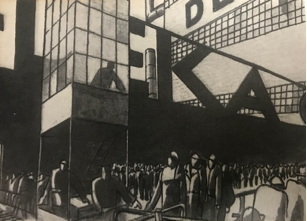