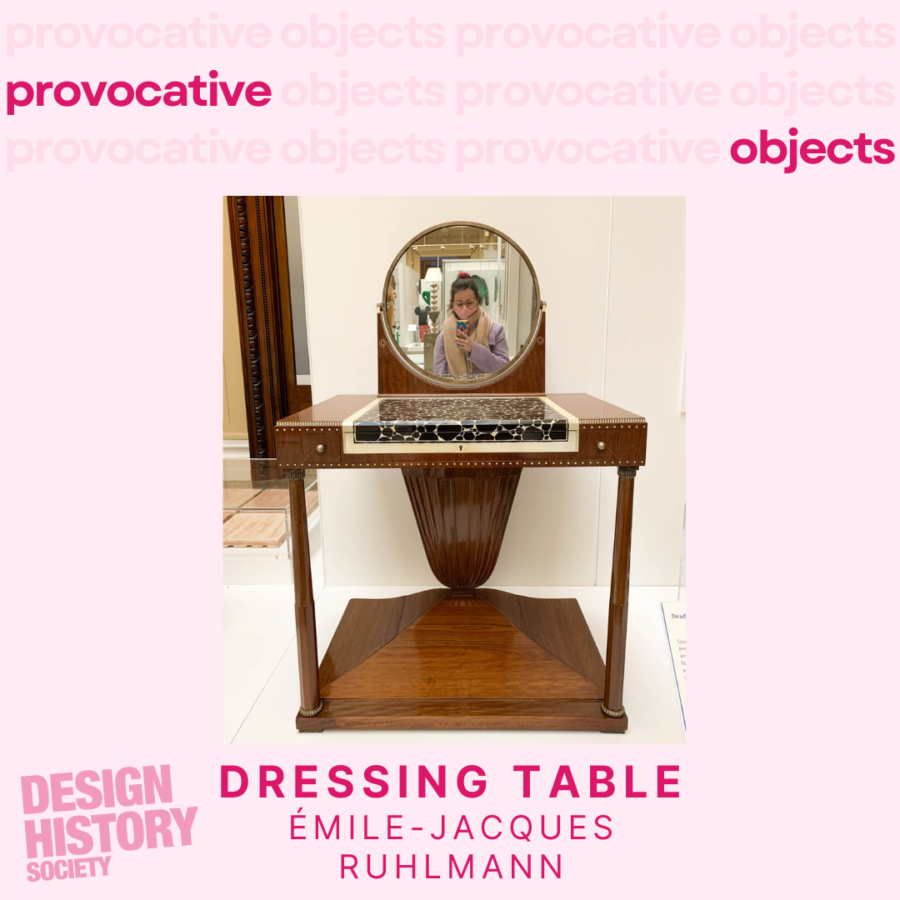 Among the many objects displayed in the 1900 – Now Gallery at the Victoria and Albert Museum is a dressing table designed by Émile-Jacques Ruhlmann from around 1919 to 1925. Made out of a large number of imported exotic materials, it raises questions about the place of origin of these materials as well as the reasons for their use. Designed by one of the most famous Art Deco interior and furniture designers, during the peak years of the French Art Deco style, the dressing table can act as a window into the role of imported exotic materials in French furniture production during the interwar period, which is attributed to the years 1919 – 1939.

According to the V&A Museum, the main carcase is made out of oak, the urn-shaped base is veneered in Andaman padauk, and the top and mirror back are veneered in purpleheart. Solid purpleheart was used for the columns, the drawers are made out of mahogany and silvered bronze was used for the mirror and fittings. Finally, ivory and ebony inlay can mainly be seen in the pebbled pattern on the top of the dressing table, but ivory inlay is also present in the mirror base in the shape of a spiral. Simple dotted lines and a string of rectangles of ivory inlay are visible around the top.

During the interwar period, France was in its Second Colonial Empire, having one of the largest colonial empires in the world. In this period, France had its colonies in North and South America, India, Africa, the Middle East, the Caribbean, Oceania, and Indochina. The majority of the materials used for the production of the dressing table in focus have come from what were France’s colonies at the time.

Using the dressing table as a prime example of a high-quality French Art Deco piece of furniture, it is apparent that furniture pieces of this kind were most likely used as promotional tools for the French colonial empire. By joining together tradition, and modernity with ideas of exoticism, designers like Ruhlmann demonstrated France’s superiority in furniture design and manufacture as well as its geopolitical dominance. Through state-funded and organised international exhibitions, such as the International Exhibition of Modern Decorative and Industrial Arts held in Paris in 1925, the French government was able to promote and encourage the use of materials imported from its colonies, hence improving the country’s economic position. However, this was done at a cost of colonisation and the negative consequences that were the result of it. Brochures, journal articles, and trade periodicals aided in the public’s understanding of previously unknown materials that were coming from the French colonies. It could be argued that without the use of imported exotic materials, Ruhlmann’s furniture pieces would not have acquired the popularity that they did. The French government discovered a fruitful opportunity in allowing designers like Ruhlmann to use the resources that were being exploited from its colonies to create furniture pieces, like the dressing table.


The next time you will visit a museum, think about what other stories, apart from the ones presented on the museum label, the objects might be hiding. Who is in charge of uncovering those stories? What should larger institutions, such as museums do to aid in uncovering the unknown or less known stories?