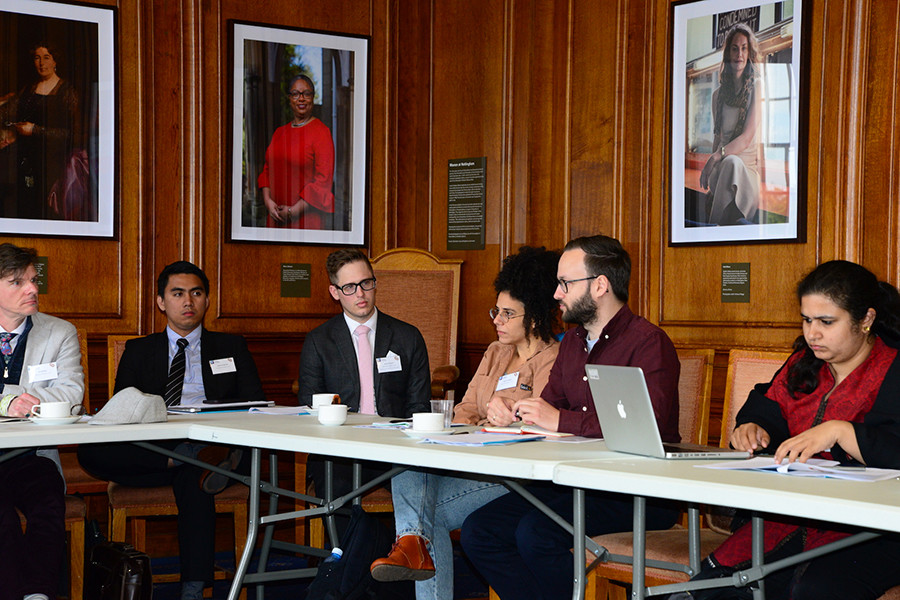 On 11 May 2018, the Resonating Occupation: Sound, Music and Imperialism workshop was held at the University of Nottingham. Run by ERC research fellow Dr Russell Skelchy as part of the Cultures of Occupation in Twentieth Century Asia (COTCA) project, the workshop brought together international scholars to unpack the sounds of occupation, aiming to explore 'how the context of occupation gives rise to distinctive auditory environments and musical cultures; or, in other words, what does occupation sound like?' COTCA is led by Dr Jeremy E. Taylor, and runs in three interwoven streams: representations of occupation, sounds of occupation, and spaces of occupation. In each stream, COTCA considers how foreign occupation shaped culture in modern Asia, with individual projects spanning monuments in the Philippines under U.S. colonial rule, to everyday sounds and sonic expressions in Japanese-occupied North China. Having recently joined COTCA under the 'spaces of occupation' stream, the workshop for me was an exciting introduction to the interdisciplinary approaches and perspectives of the project.

The event aimed to address and provoke discussion around several aspects of sound and occupation including: the role of sound in the relationship between coloniser and colonised; listening to occupation; comparative studies of sound in different geographies and chronologies; and methodologies and approaches to studying sound. Historian, curator and sound artist Dr Sylvia Necker from the University of Nottingham introduced by asking 'why do we not take sound and sonic seriously?', questioning why we always begin with recording sound before simply listening and observing. Are we truly influenced more by visuals than sound? Or are we overlooking this significant sense in our observations of the everyday?

A diverse range of speakers were included in the programme, and covered vast territories as well as Asian contexts. The workshop brought together historians, anthropologists, musicologists, artists and cultural scholars, amongst other disciplines, exploring both contemporary and historical occupations from present Londonderry to the nineteenth-century American South. Whilst always considering the backdrop of occupation in each case, overall topics sought to further interrogate the everyday experiences of occupation. In many presentations, material culture weighed deeply in examinations of sound and music, whether through radio, theatre, or musical instruments.

Several papers stood out for their links to material culture and design history. Opening the workshop was Maya Cunningham from the University of Maryland, discussing 'The Hush Harbor as Sanctuary: African-American Survival Silence During British/American Slavery'. Considering sound, and indeed the suppression of, through voice and song, Cunningham discussed the practices within hush harbours, secret gatherings by African American slaves to practice their faith, sing hymns and pray. As white communities manipulated the morals of Christianity to actually advocate slave ownership and encourage slave submissiveness, slave preachers organised illicit meetings to perform their own religious rituals. This practice was intertwined with planning escape, and 'It was here that prayers against slavery and liberation messages of the Bible were voiced […] where quilts, pots, and hands transformed sound into silence for slaves' very survival'. Most moving of these objects listed was the prayer pot, a cast iron pot that would serve as a tool for cooking in the daytime, and transform at night into a centrepiece for hush harbour practice. Turned upside down, prayers would be said beneath into the pot, muffling the sounds of prayer. The weight of the pot, the smells within, and the echoing chamber where prayers would resound further assert how these pots embodied both the suffering and the determination of these slaves. Herein lay the secret hopes and dreams of the congregation.

Whereas Cunningham considered the voice in terms of suppression and survival, Iris Blake from University of California, Riverside used voicing to critique constructions of Western modernity and the body. Speech and voice was made 'scientific', as with theories of optics, in the nineteenth-century, meaning to make speech 'rational' and 'technological' according to Western colonial, capitalist and modernist perceptions of the body. However, these sensorial aspects of voice is not exclusively human, as demonstrated by the speaker's case study of artist Rebecca Belmore's work, specifically Speaking to their Mother and Wave Sounds. Both pieces were used to empower the land and their indigenous peoples in various locations in Canada and the USA. Speaking to their Mother allowed First Nations communities to amplify their voices in connection to the land as a means of protest against border lines and sovereignty, using a giant brass megaphone-like sculpture. In contrast, Wave Sounds was an opportunity to listen to the land through instruments placed into the landscape, even moulded out of the landforms in these locations 'responding and conforming to each natural site'. For Blake, using the contours of the land in this way reframes voicing as a decolonial option.

In the final paper of the workshop, these negotiations of voice were addressed in the urban context of India in 1925-45 c. Dr Vebhuti Duggal from Ambedkar University Delhi explored the loudspeaker and how its participation in the network of technologies in India during this time transformed the sounds of the everyday. The loudspeaker changed the landscape through its integration and refashioning into public space, through use in procession, as well as on vehicles and public buildings, meant both for amplifying and disciplining through various means of propaganda. In this case, the loudspeaker acted as a facilitator of the bodily habitation of the city, organising public culture by creating 'attentive gatherings' in public spaces to listen to transmissions of speeches and radio. The quality of sound was also a point made, contextualised by documents found by Duggal expressing the concerns over the amplification power of loudspeakers in public space. Its participation in the public realm also meant interactions with people manipulating the sound quality through means of adjusting positions of the body and of the object in spaces, like parks and bazaars.

Although sound was the primary question in the workshop, the importance of objects in relation to sound was a consistent thread through many of the papers. In just these three examples objects act as mediators in the network of relationships between humans, places, and things, more specifically with governments, marginalised communities, the landscape, and even with God. The sensorial experience of sound bounces between these elements, both in the spatial experiences of constantly being in sound, and in the physicality of creating sound, loud or soft, amplified or silenced. Objects are transformative tools in creating soundscapes of safety and strength, but can also make people stop and listen. You might say that objects can make sound heard.

Conversely, while design history commonly deals with material and texture, perhaps the hand and the eye might also consider the ear when analysing objects and their histories. While objects such as radios and loudspeakers are more obviously sounding design histories, how might reframing the pot as an echoing chamber, becoming a church rather than solely a kitchen utensil, unsettle what we think we know about an object? Materiality is after all multisensorial - stopping to listen to objects may unearth much more than what meets the eye.