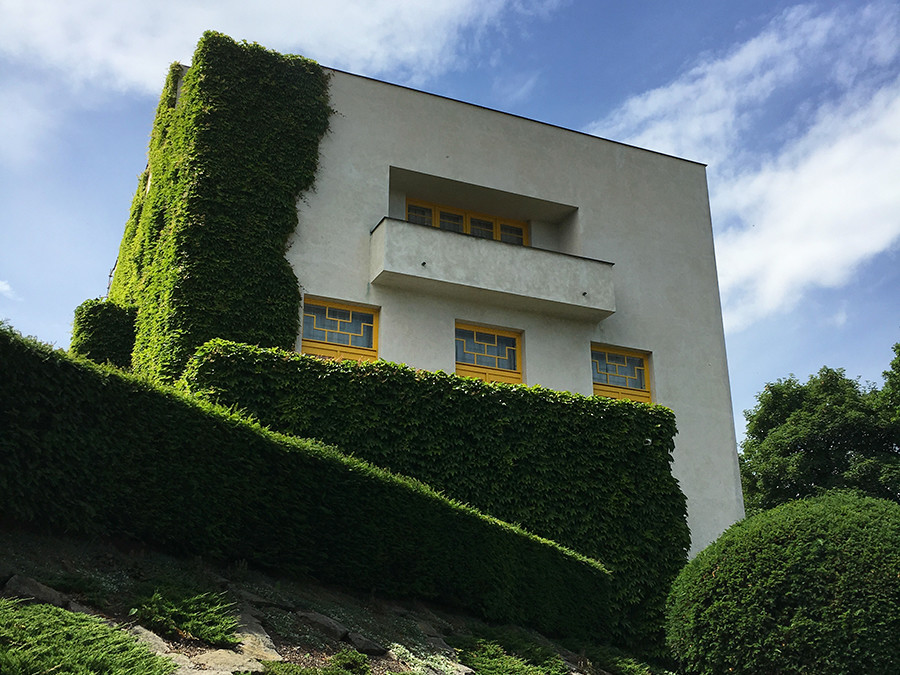 Prague and Brno, the two largest cities in Czech Republic, are home to an array of Modernist houses. My interest in visiting Modernist houses was sparked by a trip to the Villa Tugendhat in Brno in April 2016, spurring later visits to Villa Müller and Villa Rothmayer in Prague. The three twentieth-century villas mentioned are constantly compared, not least because of the three 'star architects' behind the buildings. This article explores their distinctions through comparing their interiors, and the representations of these houses and the families living in them.

The Villa Tugendhat is the most famous and extravagant of the three villas. It was designed by Mies van der Rohe, with interiors and furniture by Lilly Reich. The house was commissioned by Grete Tugendhat, the wife of Fritz Tugendhat, who were both from Jewish German industrial textile families based in Brno. The piece of land that the house sits on, and its funding, was gifted by Grete's father, and the commission was accepted after Mies van der Rohe was impressed by his visit to the plot. The villa was completed in December 1930, and the family moved in with their two young children.

I was particularly interested in the interiors, and understanding the way those living in the villa used the space. Mies van der Rohe was strict in the 'living' of the space, even after the family moved in. Furniture and objects were heavily curated by him, evident in some of the design features of the interiors - our guide showed us a hidden room for storing the family's paintings and objects, which were ordered to be removed whenever Mies van der Rohe visited.

The main windows in the living area show that the children were not thought of in the design: floor to ceiling glass panels opened the first floor to a single-storey drop into the garden. The question of whether the building could be 'lived in' was asked at the time by art historian Justin Bier, with debate as to whether the building was more a monumental showpiece than a home. Although the Tugendhat's rejected this idea, their life at the Villa Tugendhat was thwarted by the Second World War: the family fled for Switzerland in 1938, having only lived at the villa for eight years.

The Villa Müller in Prague (below) also receives many modern architecture enthusiasts, but is more modest in size, and visibly more lived-in. Built in 1930, the house was commissioned by František Müller, of construction company, Kapsa and Müller, which specialised in reinforced concrete. This became the foundation of the house, working particularly well with Loos' 'Raumplan' spatial design, which sectioned out the interior space into rigid geometric forms.

The interiors of Villa Tugendhat and Müller happen to be closely related, with much of the built-in furniture produced by the same firm, Standard Flat Company, run by the architect Jan Vaňek. In the case of Villa Müller, the built-in furniture, finished with flame mahogany veneers for the 'masculine' rooms, and Indian lemon wood for the 'feminine' rooms, visually fill the interiors with the polished wood grain. Interspersed in the space are wicker chairs with floral cushions, and cabinets of glassware and Oriental ceramics. Such personalised and gendered aspects of the design give the house a comparatively human atmosphere, in spite of the distinct public and private spaces in the house. The Orientalist features, most explicit in the Japanese sun room on the top floor, and the oriental-style window in the parlour, express the Müller's more decorative tastes, in line with the fashions of the period.

The Villa Rothmayer, built between 1928-1929, is the lesser known of the three, and is generally not visited as much by foreign tourists. Otto Rothmayer was an architect himself, and the villa was built for his own small family: Božena his wife, a fashion and textiles designer, and his son Jan, who later worked for Czech television. It is immediately more like a home, with more practical than decorative considerations. The building was almost an exact copy of a house Otto Rothmayer had helped to design and build with his mentor Jože Plečnik in Ljubljana, save for some of the decorative architectural features.

While the interiors were comparatively less spectacular, the smaller details of the house were fascinating to contextualise in the space. The way that Rothmayer sourced some of the components were both mysterious and playful - most satisfying were his use of cemetery screws to fix marble slabs to the walls of the bathroom, or the beautiful hospital sink that he fitted. Both Otto and Božena made their marks on the house through the furniture and textiles that they designed and built inside. Even more marvellous was the way that Jan, who inherited the house after his parents' death, built a stereo system (below) from scratch to host musical performances in his childhood bedroom during Communist rule. In this sense, the Villa Rothmayer really fulfilled the modernist idea of 'form follows function' that Villa Müller and Tugendhat have become monuments of - as the outcome of a series of efforts from all the actors who lived within the building.

In my view, the modernist house is brought alive by the stories of its living than the design itself. The expectations of its design, such as the glowing onyx wall in the Villa Tugendhat, while often flamboyant and spectacular, lack lustre without the stories of their use and tell-tale signs of its living. In each visit, the guide was crucial for unravelling these stories, breaking down the monumentalism of the houses through the details of the design and making. It was only through their explanation that I came to realise the importance of the female actors of the house, particularly Lilly Reich in the Villa Tugendhat, as well as the influence of the children in the design and use of the house. All of these actors who come up against the great modernist facade, the women, the client, their children, even the guide in the present day, bring the everyday into the grand narratives of modernism these houses come to stand for - they make a modernist house into a home.

Headline image: A view of Villa Muller from the main road.