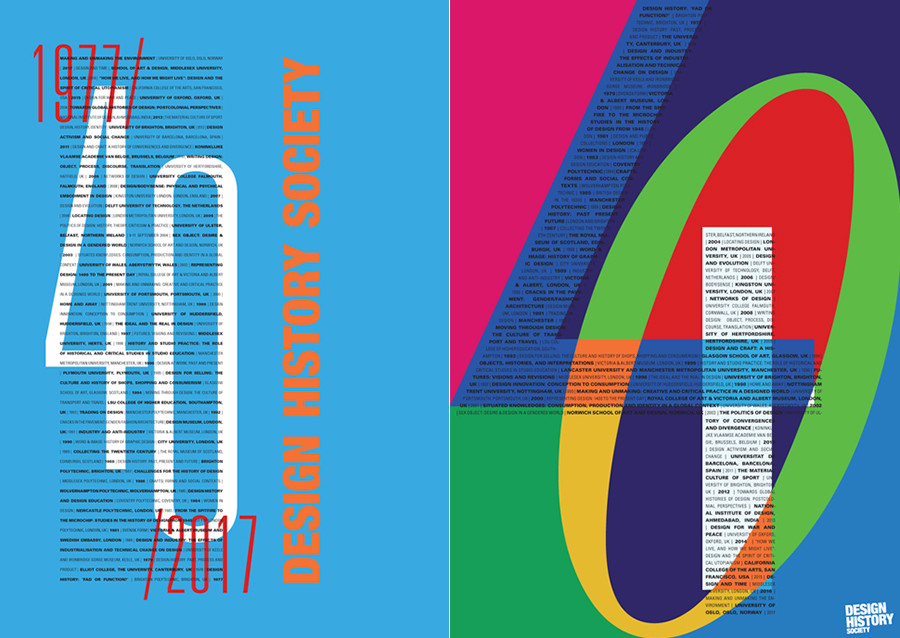 40 years have passed since the Design History Society was formed in 1977. Many opportunities have been created by the Society to debate not only the past, but also the future of the field. Additionally, the Journal of Design History, created by the Society in 1987, is now a leading journal in the field and celebrates its third decade of publication this year. To commemorate both milestones, the Society decided a poster should be created for the upcoming DHS 2017 Annual Conference.

As a graphic designer, the challenge of designing a piece that could rise to the requirements of such a learned audience seemed daunting. As a design historian, it is a privilege to become part of the history of the Society, and an exciting opportunity to dive into the Society's archived files and indulge myself in the delightful task of detective work, one of my favourite things about being a design historian.

In order to choose the visual elements for the poster, one of the first steps was to know more about the Society's past years and to find out what kind of materials were archived. With that in mind, I ventured into the files held at the DHS headquarters in search of posters, leaflets, and programmes to uncover all possible samples of material culture related to the Society.

One of my most unexpected discoveries entailed materials relating to a pre-Society past, in particular programmes of conferences held before the official formation of the Society. The circumstances for why these documents were kept are unknown, and being practical about my task I had to focus on finding visual elements rather than explanations. Nevertheless, it was quite interesting to find, for instance, the programme for a three-day course entitled 'Approaches to Design History' held in 1972 at Lanchester Polytechnic featuring John Heskett amongst its lecturers. Or the programme of the conference 'Design: 1900/1960' held in 1975 at Newcastle upon Tyne Polytechnic, featuring names such as Adrian Forty, Raymond Watkinson, Bridget Wilkins, and Tim and Charlotte Benton. Later I would learn that the idea of the Society had been germinating since these timely meetings that predate its formation.

Another interesting discovery included objects and documents that demonstrate the passage of time through technological change, mainly due to the advancement of digital technologies. Some of the documents archived register changes in the practice of graphic design, with techniques rendered obsolete by computers and digital typesetting. For example, a negative of the paste up of a poster layout used for engraving plates to offset printing, or the DHS logo in acetate.

Of course these were very interesting to me, but they were not the most representative samples of the Society's history. For the poster I was designing I chose instead to use a list of conferences held by the DHS to date, along with the convenor's information and year, as one of the visual elements to structure the poster layout. However, to have a list of all the conferences I had to first trace their existence. Guided by Joanne Gooding's list of conferences of Design History from the early 1970s onwards, I began the search, trying to fill in the blanks.

Some years many small conferences were held by the Society, in others they convened as one large event, such as the 10th anniversary conference 'Design History: Past, Present and Future' held at the Brighton Polytechnic in 1987. Additionally, the conference proceedings were published intermittently, and only a few were found. Most proceedings were published by partner organisations rather than by the Society itself, as with 'Design History: Fad or Function?' (1977) and 'From the Spitfire to the Microchip' (1981), both published by the Design Council, or the proceedings of the conference 'Design Activism and Social Change' (2011) held in Barcelona, which are available online on the Design History Foundation website. However, to complete the puzzle, the printed DHS Newsletter proved to be a reliable source of information. 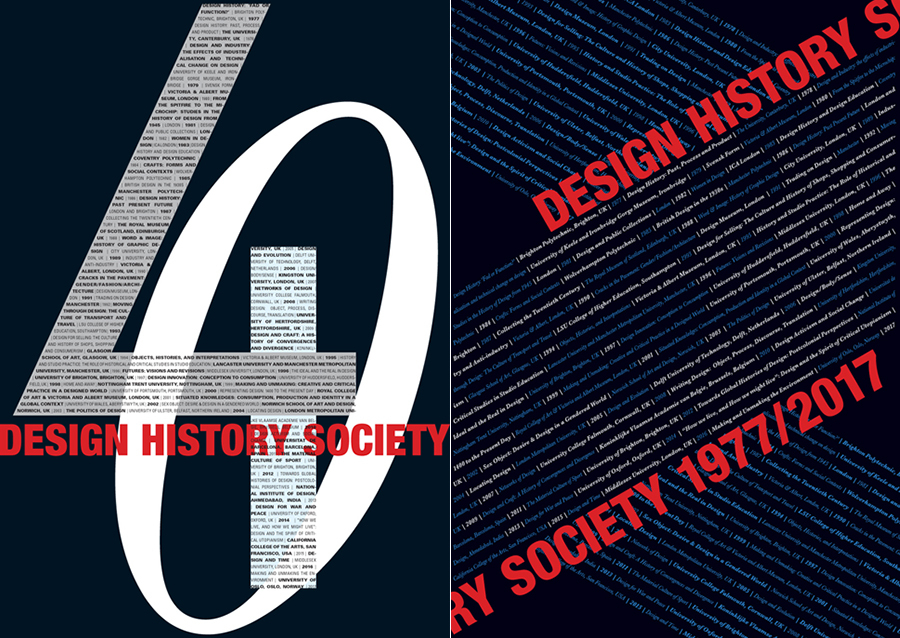 Now, with a complete conference list at hand, it was time to select the colours and type to be used in the layout of the poster. As a personal choice, I appreciate the use of bright colours and, if possible, many at the same time. The interesting range of colours used in the DHS website formed my main palette, with the addition of black and white. Along with Helvetica, currently used in the Society's logo, two typographic families were used to create the final layouts. One of the four layouts presented was chosen by the Society, with small tweaks made to the final version. On the back of the poster, images of the archived materials were selected to illustrate some of the curiosities and highlights from the Society's history.

This experience was revealing, as it took me from the reality of the present moment - of knowing those that make the Society alive today - to an awareness of the Society's past. And, now I know that many respected British scholars have been involved with and in the Society for a long time: Penny Sparke, Jonathan Woodham and Jeremy Aynsley are among the names frequently found in conference materials, attesting to their active participation in the making of the Society and the field of Design History itself. For what it is worth, it became clear to me that the Society has a wonderful legacy that should be celebrated. So this year we commemorate the 40th anniversary of the Design History Society - and look forward to the next 40 years to come.

Edit 20 September 2017: Download your own copy of the DHS 40th anniversary poster here.