“Velma Rossa and Papa Petit (aka 2ManySiblings). Photographed in Nairobi by Sarah Waiswa”

In her closing remarks at the Creating African Fashion Histories conference, Simidele Dosekun, lecturer in media and cultural studies at University of Sussex, commented that many probably viewed ‘African Fashion’ as an oxymoron; however, she felt that the event had done much to dispel this myth. The four panel sessions organised as part of this conference did indeed produce an alternative narrative that highlighted the continent’s historic and ongoing relationship with fashion. In much of the discussion, the focus was on fashion as a means of ‘self making and self styling’ (Dosekun). One of the most important arguments, furthermore, was not to consider Africa as one homogenous group, but to recognise and celebrate the diverse number of societies, religions and cultures that make up the continent.

Among some of the first speakers was Jody Benjamin, who considered how the trade of cloth across different African countries, as well as outside of the continent, in the seventeenth- and eighteenth-centuries also demonstrated that trends and status symbols evolved over time. He argued that when individuals in eighteenth-century Sierra Leone chose to wear items of European dress with local garments, it was not a failed attempt to mimic British fashions, but a clear choice to express lifestyle or a chosen identity. Christopher Richards continued this theme through an examination of Ghanaian style in the 1950s and 1960s. He illustrated how the Kaba, an item thought of as a form of national dress, had several different iterations that fell in and out of fashion. Richards argued that Ghanaian women were most definitely influenced by international fashions, but gave these looks a uniquely Ghanaian appearance. This underlined that the use of fashion to express an identity and global cultural exchange are far from a new phenomenon in Africa.

Carol Tulloch’s paper took a wider approach and focused on several case studies of self-styling across the Black Diaspora. A particularly interesting example was Ebony Magazine, a publication aimed at the African-American middle class, where a 1970s article celebrated the wide range of textiles available from Africa and encouraged readers to use them to add a touch of authenticity to their ‘ethnic looks’. The talk highlighted how people across the diaspora can use clothing to celebrate identity and heritage, much like Benjamin’s Sierra Leoneans choosing to wear European dress. This first panel demonstrated the importance of historians looking back at clothing in Africa in order to create histories and narratives that have been forgotten, providing further source material for people, both within these particular cultures and outside of them, to draw inspiration from.

In the second panel the speakers presented their research into contemporary fashion scenes that are drawing from a global approach in order to stimulate their work. Victoria Rovine’s paper focused on the concept of ‘cross-cultural contamination’ (Rovine), suggesting this as a method of positively drawing from other cultures. She used the example of Ghana Boy Tunics, garments made by Malian men working temporarily in Ghana from 1960s to 1980s. Rovine argued that their garments were a way of expressing experiences abroad; the tunics were similar to traditional Malian dress and were embroidered with traditional techniques, but depicted scenes the men had seen in Ghana. Some examples even included motifs inspired by popular Bollywood films. Rovine stressed that this example is illustrative not of the Malian men wishing to mimic Ghanaian or Indian identities, but rather to draw from and make them part of their own identity.

Harriet Hughes’ paper continued along similar themes and looked at designers in Lagos. The Nigerian designers she interviewed had often been educated abroad, experiences that had influenced their work. Juliet Gilbert’s research, meanwhile, took place in Calabar, a smaller city in southeastern Nigeria. Her focus was on women learning to sew and produce their own garments, usually in reaction to clothing seen on the internet or in the latest fashion magazines. Gilbert claimed that the main interest in fashion for these women is as a tool for the celebration of the unique self – a ‘talent for individualising one’s taste’ (Gilbert). In this way they were able to position themselves as distinctive individuals in the context of a global society. 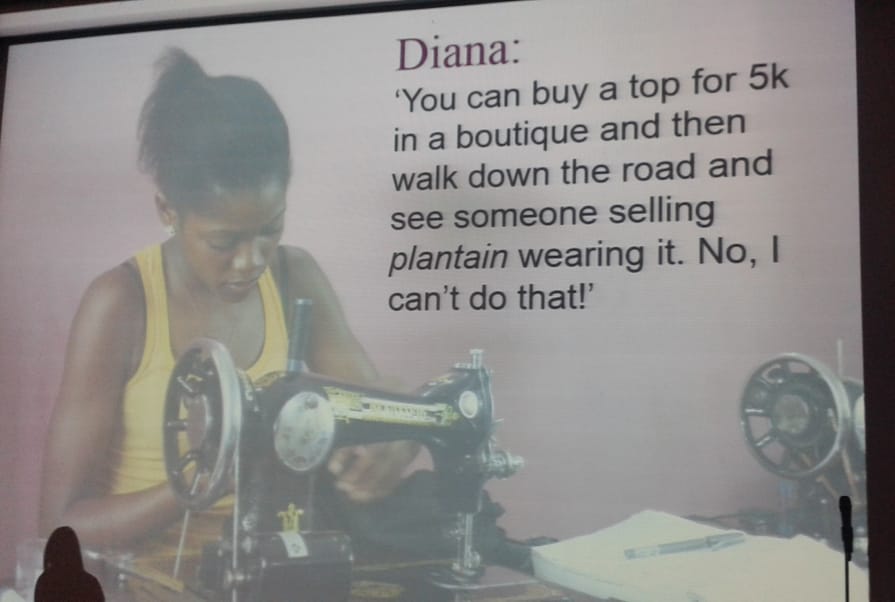 Practices of museums were considered in the third panel, which highlighted how important institutional narratives are in shaping the attitudes towards clothing. Here, all speakers (Angela Jansen, Erica de Greef, Heather Akou, Nicola Stylianou and Edith Ojo) touched on the past categorisations and collecting methods used by museums in their case studies: how these could not be ignored, but should be used as a basis to critique and grow from. One such problem is the categorisation of clothing as ‘dress’ and the assumption that it belongs to ethnographic museums, rather than viewing it as ‘design’ and placing it alongside other examples of fashion. Two members of the panel represented the current Fashioning Africa project at Brighton Museum where the aim has been to represent key aspects of African fashion within the museum’s collections. Rather than acquiring anything that could represent African fashion, the panel (consisting of museum staff, academics and experts on various areas of African fashion) looked at the current museum collections that consisted of African objects collected pre-1940s. They identified items that would develop from and contrast with the narratives created by these existing objects in order to produce a more informative collection.

The fourth panel sought to provide some ways that African ingenuity could be disseminated to a global audience. This was perhaps the most important panel as the actions of these individuals provide a very visible and accessible way for the global public to discover the work of different creatives, past and present. Mouna Belgrini and Yosheph Ouechen both reported on Moroccan fashion and spoke of how unique the Morroccan style was - a prime example of how there is not just one continent-wide African aesthetic. This was supported by Helen Jennings whose website Nataal seeks to illustrate the array of African design available. Avis Charles continued to place African fashion in a global context by speaking of her project where Mongolian and Ethiopian weavers collaborated to exchange ideas and create new designs. She also outlined the importance of fashion weeks as a tool for countries to display the work of local designers: as well as generating interest in the fashion within that country, fashion weeks stimulate the growth of burgeoning fashion industries, encouraging designers and cities to develop the infrastructure to become financially successful ventures.

One of the greatest challenges and largest pitfalls when discussing post-colonial nations is to focus on a colonial narrative and place these societies as victims. Victimhood is dangerous as it places the cultures in a constant state of subjugation – they are pitied and lose any agency they may have had. This also continues the dated and unnecessary concept of East and West. While the crimes committed by colonialism cannot and should not be forgotten, we need to celebrate the rich cultures of these groups both past and present. Creating African Fashion Histories was subsequently an excellent celebration of several diverse African cultures, which exist within a global and interlinked society. 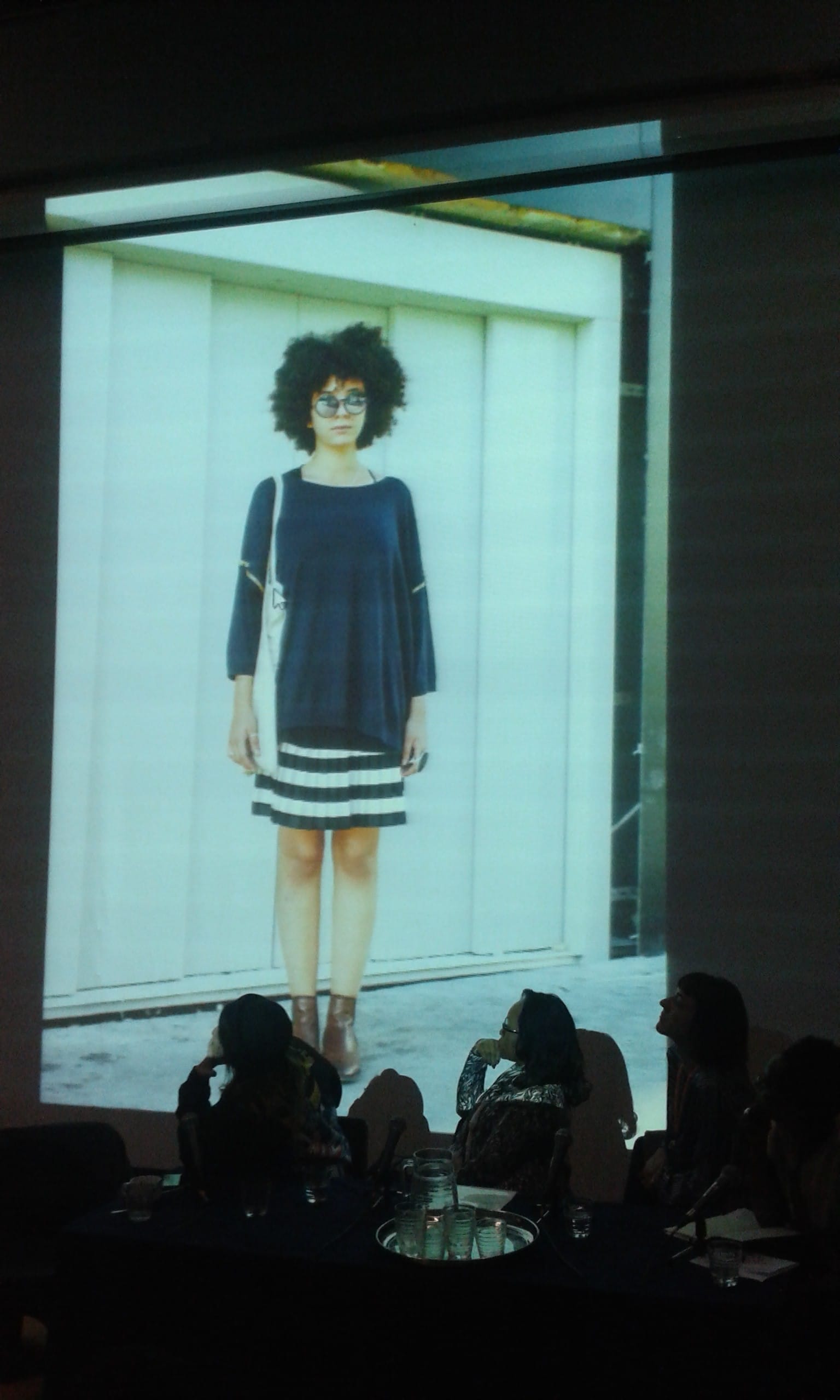