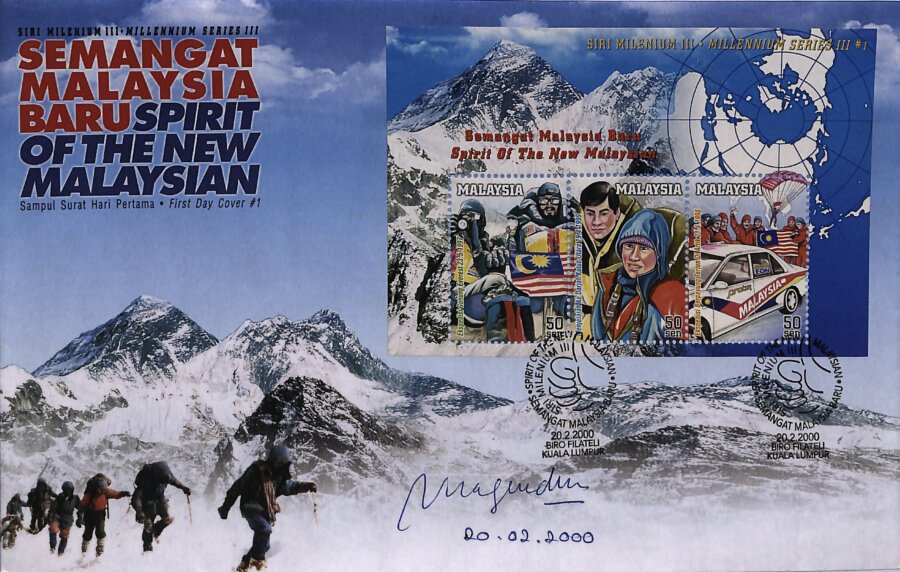 Thanks to the generous support of the DHS Virtual Student Award I have been able to put together an archive of designed materials related to Wawasan 2020, Malaysia’s flagship modernisation programme, in collaboration with the Malaysian Design Archive . Launched in 1991 by Prime Minister Mahathir Mohamed, Wawasan 2020 (in English, ‘Vision 2020’) laid out nine economic and social goals to make Malaysia a ‘developed’ nation. Whilst the programme has been extensively covered by economic and political analysts, it also fostered an underexplored material culture of visual speculations as to what the ideal ‘modern Malaysia’ would look like, and subsequently how the ‘modern Malaysian’ citizen would fit into this utopian setting.

The impetus behind the archive was my dissertation: ‘Visualising Wawasan 2020 : Aspirations for a Modern Malaysia’. The initial search for primary sources involved scrolling through online forums, interviewing researchers and designers, following leads through their recommendations, and at times digging into my own personal archive of drawings I made as a young student in Malaysia which my mother (from whom I have also inherited my hoarding tendencies) had kept in our basement. Recognising the lack of a single coherent archive, the Wawasan 2020 archive is an attempt to collate these materials together, to create a useful resource for potential design researchers and to catalyse a re-examination of the development programme at the year of its supposed climax.

The award has funded the primary leg of acquisitions for the archive, which consists of a collection of first day covers from the years 1980 to 2010. These objects are routinely produced by the Malaysian postal service to mark the issue of each new set of postage stamps. They consist of a decorated envelope, the new stamps in issue and detailed information about the event or national achievement which the issue commemorates. Over the course of my research trip to Malaysia this summer, I was able to access the first day cover collections of specialist vendors at Malaysia's flea markets.

For example, at a weekend flea market in Amcorp Mall, a popular trade centre in Selangor, I purchased a cover entitled Semangat Malaysia Baru (‘Spirit of the New Malaysian’) which was released on 20 February 2000. The cover features two illustrations: one of the multiethnic Malaysian team who climbed Everest and one of the similarly diverse team who carried out a successful expedition to the North Pole. Both proudly display the Jalur Gemilang (Malaysia’s national flag). So far, so conventional. However, the cover also celebrates the event of the Proton Wira car - Proton being Malaysia’s sole domestic automobile manufacturer - which had been ceremoniously parachuted from a plane onto the North Pole in 1998, the same year Malaysia and its neighbours were grappling with the Asian Financial Crisis. In this way the cover showcases the central ideological underpinning of Wawasan 2020 : the unique capacity of the proud and distinctively diverse Malaysian people to surmount the world’s toughest challenges, whether they be physical, financial or technological. To its critics, the image could also be seen to showcase how Wawasan 2020 primarily consisted of performative displays of Malaysia’s ostensibly advanced capabilities which frequently failed to match the rather less glamorous reality of individual Malaysians’ lived experiences.

The designs of these first day covers capture the conventional narrative of Wawasan 2020 as a state-led programme. In reality, however, Wawasan 2020 was refracted kaleidoscopically throughout Malaysian society. To reflect this, subsequent acquisitions for the archive feature various objects designed by the Malaysian populace which were inspired by and ultimately served to shape the legacy of Wawasan 2020. Examples include: a popular comic set in a utopian Kuala Lumpur in the year 2020, architectural renderings for a symbolic monument erected to commemorate the upcoming millennium, and speculative designs for futuristic submarines by local design students.

I am highly grateful for the opportunity to collaborate with the Malaysian Design Archive (MDA) on this project, without whose input this project would have been impossible. MDA is a not-for-profit archive of visual culture in Malaysia based in Kuala Lumpur and is the largest digital repository of cultural material relating to Malaysia. I am particularly grateful for research fellow Lim Sheau Yun and archivist Nadia Nasaruddin’s support in acquiring, cataloguing and digitising objects for the Wawasan 2020 archive. With their guidance and expertise, the archive has now digitised 58 objects with plans to continue expanding several more next year.

By treating Wawasan 2020 as a predominantly visual - as opposed to legislative - programme, one is able to escape the narrative of the programme as an economic failure and focus, instead, on its partial success in creating and effectively promulgating a material culture of speculative Malaysian modernities. As well as providing an interesting and thought provoking insight into one of Malaysia’s central political projects post-independence, it is hoped that the archive can contribute to a broader discussion of the role design plays in development programmes across the Global South, from the African Union’s Agenda 2063 t o Saudi Arabia’s Vision 2030 . The rich diversity of design surrounding Wawasan 2020 is a reminder that these programmes can be fruitfully understood as lively design phenomena. More generally, the project demonstrates that the Global South presents a rich and largely untapped vein of sources for contemporary design historians to explore. In this respect, as the official design of Wawasan 2020 so frequently proclaimed, ‘ Malaysia Boleh! ’.