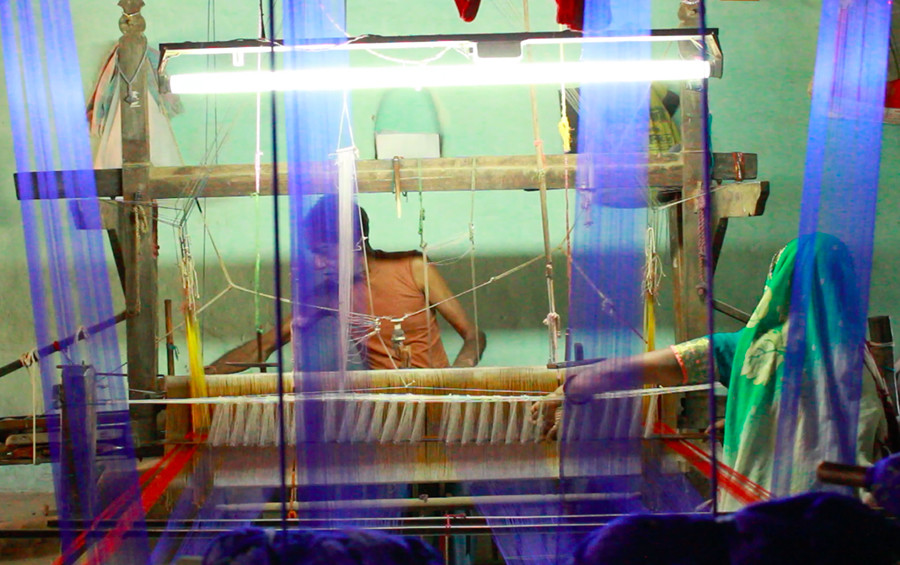 I am in the third year of a PhD, studying design and business education for traditional artisans in India, focusing particularly on handloom weaving. I undertook fieldwork in India from September 2015 until March 2016. The Design History Society Student Travel Award enabled me to conduct filming in one of the (two) case study locations: Maheshwar, a small town in Madhya Pradesh state.

Formal, long-term design and business education for rural artisans is a relatively new phenomenon in India and, therefore, has received little empirical research. This research contributes to debates on the survival of traditional craft within a modern technological, globalised and capitalist society, and aims to highlight impacts of this education and whether or not it is a successful development strategy for livelihoods in rural India.

Craft and Design in India: A Brief Background

Handloom weaving dates back 7,000 years on the subcontinent, and while it has experienced decline over the last two centuries due to competition with British imports and the country's own powerloom and semi-automated textile industry, it continues to be practised all over India. For the over four million people who are employed in the industry, it is an important part of their culture, identity and social life, as well as their livelihood.

Since India's independence in 1947, government and non-government initiatives have helped craftspeople to reach new urban and international markets looking for hand-crafted, 'authentic' and traditional craft products. Craft revival was inspired by Gandhi and his swadeshi (self-rule) movement symbolised by khadi (hand-woven, hand-spun cloth), using traditional crafts as symbols of national identity. These efforts often involved intervention by a professional designer.

Design as a discipline, however, is relatively new in India, and the first design education institute, National Institute of Design (NID), opened in 1961. In the following decades, more design institutes opened, and today most cities have a plethora of them. But these institutes have always only been open to the English-speaking middle class, and not artisans in rural areas, most of whom receive only basic primary education in the local vernacular or Hindi. While one of the main aims of NID was socially-oriented to meet the diverse needs of the whole Indian population, there has been broad debate within both academic discourses (Ghose, 1995, DeNicola, 2012) as well as in craft and design discourses (Chatterjee, 2005) on the divides created by the designer who has the creative skills and knowledge of the contemporary market, and the artisan who executes the design. In this scenario the artisan's status is reduced to labourer, and any traditional and embodied knowledge the artisan possesses is ignored or devalued.

Alternatives have recently emerged, notably two institutions that address the specific needs of artisans in providing a long-term, formalised design and business curriculum: Somaiya Kala Vidya (SKV) in Kachchh district, Gujarat, and The Handloom School in Maheshwar, Madhya Pradesh. SKV focuses on local traditions of practice, and keeps the artisan at the centre of the design process. The Handloom School (THS) invites weavers from all over India via local non-governmental organisations (NGOs) and focuses more closely on entrepreneurial skills and livelihood generation. Both regions have a strong weaving heritage, and both institutions aim to provide design and business skills that will enable artisans to connect directly with their clients. An ethnographic approach has been adopted with these two institutions forming focus case studies.

The research draws on the areas of craft development, anthropology, design history and education, and addresses a number of questions, including: how does design education reflect the local context? Who owns traditional and other designs? And what is the value of craft from the viewpoint of the artisan-designer, as well as that of the market? It also explores how traditional methods of learning to weave compare with learning and applying contemporary design concepts.

I have adopted an ethnographic approach in aiming to capture the experiences of students and graduates of the two institutes, as well as teachers, institute directors and staff, and representatives of the market. The methodology involves interviewing, observation, including participatory-observation through learning to weave in Bhujodi village, Kutch, and teaching at both institutes, analysis of texts, artefacts and visual ethnography.

I undertook the majority of photography and filming in both regions myself as a way of recording my route and pathways through the landscape I was exploring (Spradley,1980) as much as to record what was in front of the camera (Pink, 2007). Later I decided to employ a filmmaker to get good quality footage with the intention of developing it into a film, as well as to capture and document non-verbal information. We filmed both the weaving process as it has been practiced for several generations (according to the weavers), and interviews with weaver graduates of both institutes. Filming interviews enables the capturing of non-verbal communication such as gestures and body movements, and importantly for this research can show the weaver demonstrating his or her thought process behind designs, and the concepts they'd learnt at the design school, using their products as a point of reference. For example:

Film was also a way of making each of the participants known, and allow for their voice to come through in the research where in many studies of traditional craft communities the identities and stories of individual craftspeople are often left out.

Having somebody else operating the camera also enabled me to engage more in conversations and be in the frame sometimes also, which helped to break down any distinctions between the photographer and photographed, or researcher and researched (Pink, 2007). That participants themselves would often use their own phone cameras both while I was there, as well as to send me pictures of their work via WhatsApp became a useful way of interacting and making the experience more shared.

Overall filming was useful in collecting rich visual material that will help to both document the processes involved in handloom weaving in both regions, and to communicate the research findings in a multi-dimensional way. I am in the process of working with an editor to develop the footage into a feature-length documentary. I also plan for parts of the footage to be utilised in exhibitions and museums in India and the UK, and online.

I am extremely grateful to the Design History Society for the recognition and financial support of the Student Travel Award.