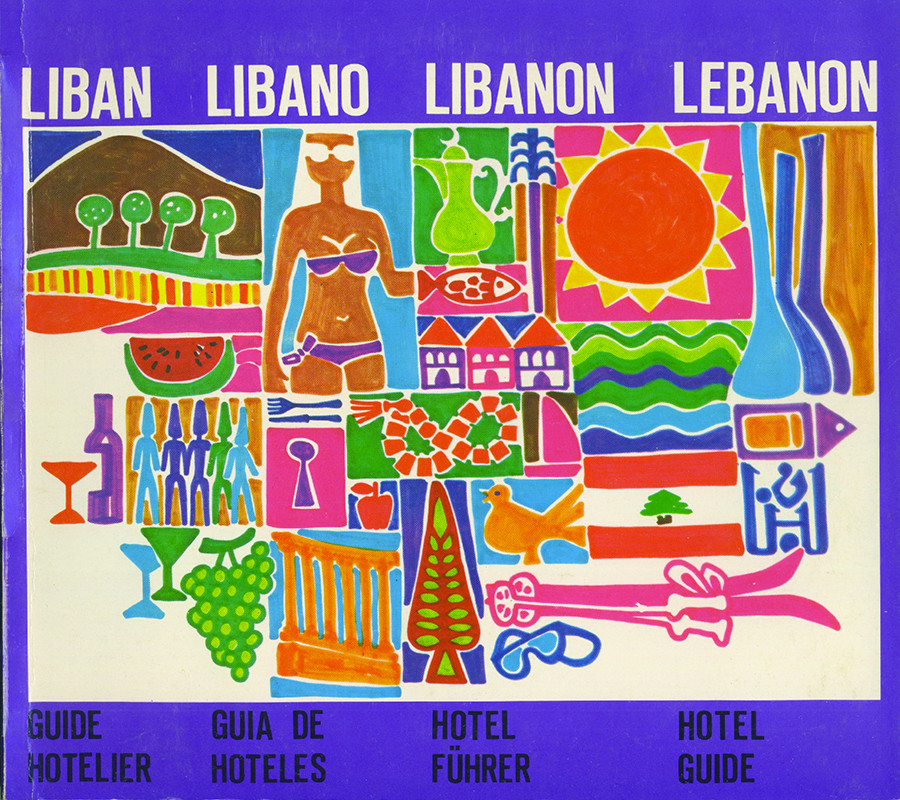 I would like to thank the Design History Society for supporting this research. The funding went towards covering the production subvention cost for Branding Lebanon through the lens of Mouna Bassili Sehnaoui (Yasmine Nachabe Taan, Khatt books, 2019).

A few years before the outbreak of the civil war in Lebanon (1975-1990), the tourism sector played an important role in Lebanon's economy. This was when Mouna Bassili Sehnaoui was appointed creative director at the National Council of Tourism in Lebanon (1969 to 1972) setting up its in-house graphic design department. Sehnaoui's playful and optimistic design played a pivotal role in the production, distribution and consumption of Lebanon as an attractive tourist destination. She combined typography, photography and her illustration skills while exploiting the limited possibilities of print production in ways that engaged the locals and visitors in appreciating Lebanon.

Nation branding in the case of Lebanon can be a challenge. Lebanon's history is rife with identitarian ideologies and essentialist notions of identity that complicate the task for developing a nation brand. A thorough analysis on identity concepts and formation is required to address its complexity and diversity. Sehnaoui's contemporary design engages with both the complex history of Lebanon, and the fluctuating notions of Lebanese identity tracing back layers of Greek, Roman, Byzantine, Arab, and other influences. Her work manifests the complex relationship between nationhood and personal identity. She is one of the first academically-trained female graphic designers to set up a practice in Lebanon.

After completing her studies in Communication Arts at the University of Arizona, she designed the logo for the Ministry of Tourism that is still in use today. Her promotion campaign, including logos, flyers, brochures, press ads, posters and maps of Lebanon, played a major role in the potential reflection and transformation of the perception of Lebanon and Lebanese life. Her work brings to the fore a critical awareness and positioning concerning identification and belonging. Social identities such as gender, race, and class that appear in her work will be analysed in relation to the historical, social, and political context. From this perspective, identities are hardly one-dimensional, but complex and intersectional, and are rather to be thought of as a process of identification and belonging than as a consistent essence.

Drawing from theoretical reflections on her aesthetic practices, the book explores different approaches, strategies, and perspectives on Lebanon during its heyday when tourism was at its peak during the late 1960s and early 1970s. Sehnaoui combines signs, symbols and lettering to express an identity in the making while empowering concepts of diversity in addressing identity. How did she use the symbols, icons, colours and forms to convey her narrative? What is her rhethoric of Lebanon as a major tourist attraction, and later how did she represent war torn Lebanon in her paintings? These are the kinds of questions this book will explore.

This monograph does not only look into the construction of Lebanon's national identity, but it also recognises the role of a female visual communicator in the production of this identity. This is the first academic work in book form that covers the graphic design contribution of a female Lebanese designer. Through Sehnaoui's often playful and optimistic lens, I trace the trajectory of her creative and thinking process that culminate in the production of a unique perspective in looking at Lebanon. One of its unique contributions is to suggest new approaches to understanding the complexities of visual communication and the challenges in branding Lebanon while designing its identity as a major tourist attraction to the western visitor, as well as to visitors from other Arab countries.

The monograph coincides with my teaching a new course at the LAU School of Architecture and Design on graphic design in the Arab Middle East. Previous to this course, the history of graphic design being taught was strikingly homogenous, overlooking the feminist and the non-Western. The monograph builds on earlier studies published in the same Arabic Design Library series (for more on this series, log on to http://www.khattbooks.com) that address visual culture in the Arab Middle East and North Africa, such as Yara Khoury Nammour's writing on Nasri Khattar a modernist typotect (2014), Yasmine Nachabe Taan on Hilmi al-Tuni evoking Arab popular culture (2014), Abdulkader Arnaout designing as visual poetry (2017), and Lina Hakim on Dia al-Azzawi, activism and graphic design (2017).

In alignment with this series and my class, this book hopes to instill the next generation of graphic designers with a broader knowledge on design history, practices and their meanings within the Arab region. This knowledge would hence extend beyond and be distinct from more conventional studies on the western design canon.

This book will be published in 2019 in Amsterdam by Khatt Books.