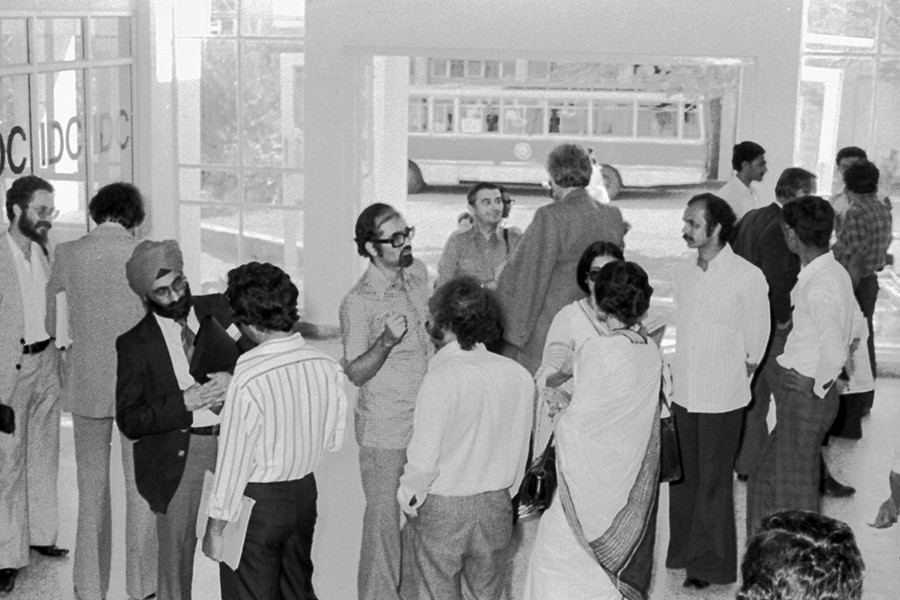 As part of my ongoing doctoral work, I am attempting to map-out and understand the shifting positions of/on design in postcolonial India. When the study moves to Indian design schools and their visions of/on design, to access the resources, a physical visit to various design schools in India was essential. I am grateful to the Design History Society for understanding the larger purpose of my research and supporting me through this particular grant. I proposed visits to Industrial Design Centre (IDC), IIT Bombay and National Institute of Design (NID), Ahmedabad for a 'research stay'. A part of the grant will also be used for the upcoming ICDHS 10th+1 Barcelona, where I intend to discuss fieldwork outcomes.

My study concentrates on the last five decades, analysing visions of design as communicated by Indian design education institutions through events, charters, documents, working papers, and formal proposals. There are three primary resources to pursue: the original documents of these visions, reports relating to these visions, and the people involved in these processes. In this post, I am elaborating from my experiences at the IDC School of Design, IIT Bombay.

After referencing Associate Professor at IDC Mandar Rane's recent publication on Professor Sudhakar Nadkarni's 'design journey', it was clear that many events that Ulm School of Design alumnus Nadkarni was involved with are not just a part of India's design history, but also enrich global design history narratives. In Rane's biographical account of Nadkarni, several landmark moments about design in India are illustrated, including UNIDO/ICSID 1979, which was co-organised by IDC and NID. Not many writings elaborate on the first half of the event, which was held at IDC IIT Bombay, since the occurrence later came to be known as the 'Ahmedabad Declaration' (through NID Ahmedabad). The event, however, was a perfect stage for India to showcase its visions for development through its rich history, institutional commitment and investment in design through various projects.

A decade later, another significant event took place, called 'Design Education: Ulm and After'. Organised in 1989, this seminar marked the twenty years of initiation of IDC and offered an opportunity to evaluate the Ulm School of Design's legacy in the institute, and in other parts of the world. A book by Professor Kirti Trivedi, Readings from Ulm, carried the discussion further. This collection of forty-one excerpts from Ulm teachers, like Maldonaldo, Bonsiepe, Aicher, Krampen, Albers, Gugelot and more, were reproduced in three sections: Issues (Philosophy of HfG), Theory (Design Methodology) and Opinions (Comments and Reviews). The collection does not just reiterate Hfg Ulm's ideas and visions for a better-designed world, but also presents a vision for further discourse in design education. A conscious reflection on the design school's ideology can be seen in the event, but these visions have been little discussed outside of the field of design history.

The library at the Industrial Design Centre IIT Bombay contains a number of sources that sit in unopened archives. Thanks to the librarian, Mohan Kumar, I was able to access one of the forgotten traditions of the institute, IDC News. The IDC News was a quarterly newsletter initiated and designed by an IDC faculty member, Kirti Trivedi. First published in October 1983, it reported various events and workshops, faculty visits and student projects. Within the first few years of its publication, two of the significant events it reported include a seminar on Indian Symbology (IDC News #6, Jan-Mar 1985) and Arthaya, an international seminar on symbols and semantics (IDC News #11, Jan-Jun 1987). In the first event, a lecture by Professor R. K. Joshi, an academic type designer and calligrapher, elaborates on the everyday symbols and myths in India. The second event, Arthaya ('meaning' in Sanskrit), brought together international scholars interested in the semantics of design.

The above events, furthermore, were part of a pedagogical addition at IDC: the introduction of the Visual Communication programme. This period illustrates the shift in focus from physical products to communication design, while the initiation of the M. Des programme in Visual Communication marked a crucial addition to design education in India. An early foundational stone can be found in the writings of V. N. Adarkar, an honorary advisor to IDC IIT Bombay, who presented one of his articles, A Social Renaissance Through Visual Communication, at the eighth ICSID General Assembly and Congress at Kyoto in 1973.

Other sets of documents I spotted were the admission brochures of the M. Des course, which often explained what a designer was and the work they were expected to do in a developing society like India. The early pamphlets of the Visual Communication programme envisioned and declared the prospective attitude of a designer as: 'from a traditional intuitive designer to a creative problem solver who can effectively use various design methods'. Here, the role of the designer was emphasised to convince technology-oriented engineers and expression-oriented artists of the importance of the profession.

I also conducted interviews with first generation faculty members like Uday Athavankar and Vijay Bapat. Other than IDC's conferences, documents and reports, both emphasised the influence of the school's outreach events through activities like degree shows. Through the years, these annual degree shows have acted as a bridge between general audiences and the design school, informing and educating visitors about the projects at IDC. Athavankar, who has been one of the founding members of the institute, mentioned one exhibition in particular, Products for People (see above), which showcased IDC projects in the seventies. This three-day exhibition, hosted at the iconic Jehangir Art Gallery, welcomed more than six thousand curious visitors. The event is mentioned in Industrial Design Centre: A decade of design experience, a publication that also acted as the precursor to the 1979 ICSID event. This compilation by A. G. Rao teased out several themes, such as design for industry, domestic, rural, public usage, healthcare and children; hence, these exhibitions offered aspirational and pragmatic visions for design and design eduction in India.

Along with NID, whose history has been extensively documented by international scholars, IDC too can be seen as significant to design historians. With its fiftieth anniversary approaching next year, it would be interesting to revisit its various positions and visions of/on design in the last five decades to see its contribution towards the landscape of design, both locally and internationally.

Saurabh Tewari
Assistant Professor at the Department of Architecture, School of Planning and Architecture Bhopal
@thinksaurabh

I would like to thank Professor Ravi Poovaiah and IDC Photo Studio's guardians, Patkar ji and Divekar ji, who generously shared the photographs shown here in my report.