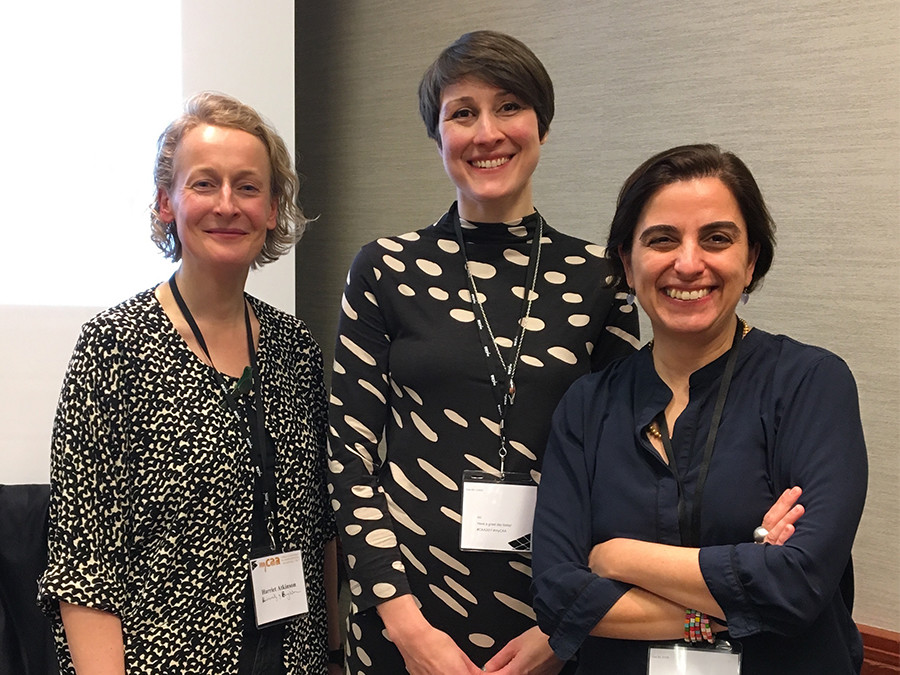 I spent Valentine's Day 2017 in New York in anticipation of one of the largest international art history gatherings - the College Art Association (CAA) Annual Conference - at which I would be co-chairing the Design History Society's (DHS) inaugural panel as an affiliate society. This was a valuable opportunity to work with a larger, US-based organisation and promote the DHS internationally.

Held at the Midtown Hilton hotel over four very full days and evenings, both the scale and scope of this enormous conference were impressive. Amongst the multiple concurrent panel sessions, numerous papers intersected with the concerns of design history, including the role of design objects in the museum, and the relationship between surrealism and interiors. Alongside the panel programme, researchers exhibited posters, colleagues staged reunions and job-seekers eagerly networked. The art of protest shifted from academic theory to political reality with ready-made placards provided for conference attendees to take to Trump Tower, a few blocks from the hotel.

Saturday morning brought the DHS panel, entitled 'Beyond Boundaries: Art and Design Exhibitions as Transnational Exchange from 1945' and jointly chaired by Dr Harriet Atkinson (University of Brighton), Dr Sarah Lichtman (Parsons The New School) and myself (University of Brighton). It investigated exhibitions as sites of official transnational exchange after 1945, aiming to move beyond individual case studies of national exhibitions to problematise exhibitions as complex sites of transnational cultural exchange (see related blog post here). In doing so, it built on the one-day symposium 'From "Soft" to "Hard" Power: Changing Visions of Diplomacy by Design From 1945 Onwards' (University of Brighton, November 2015) co-convened by Dr Atkinson and I, one of the outcomes of which was a recently published guest edited Special Issue of the journal Design and Culture entitled 'Design as an Object of Diplomacy, post-1945' (2017).

The three papers explored displays of design and art, unpicking the discourses surrounding exhibitions as mechanisms for communicating complex national identities in diverse geographical locations. Chelsea Haines (City University of New York) examined Israel's National Pavilion at the Venice Biennale between 1948-52, the moment when that nascent state came into being. A jointly delivered paper by Juliana Kei (Royal College of Art) and Daniel Cooper (Columbia University) investigated the external design and internal displays of the Hong Kong Pavilion at Osaka Expo 1970, whilst Dr Lindsay J. Twa, (Augustana University) offered new insights into the presentation of African-American art and culture at the Pan-African FESTAC (1966) and FESMAN (1977) exhibitions. The panel and subsequent discussion not only tackled specific themes of nation building, post-colonialism and diasporic identities, but also investigated the relationship between art and design histories, exploring the potential for sharing research methodologies.

The panel chairs intend to publish the papers alongside a number of other contributions in an edited book. The DHS will be convening another panel at the next CAA Annual Conference in Los Angeles in February 2018 entitled 'Imagining the International: Repositioning Peripheral Narratives in Global Design Histories'. The call for papers is open until 14 August 2017 (click here for further information).