Report: DHS Conference Bursary by Petra Seitz– Or, toward a new design history 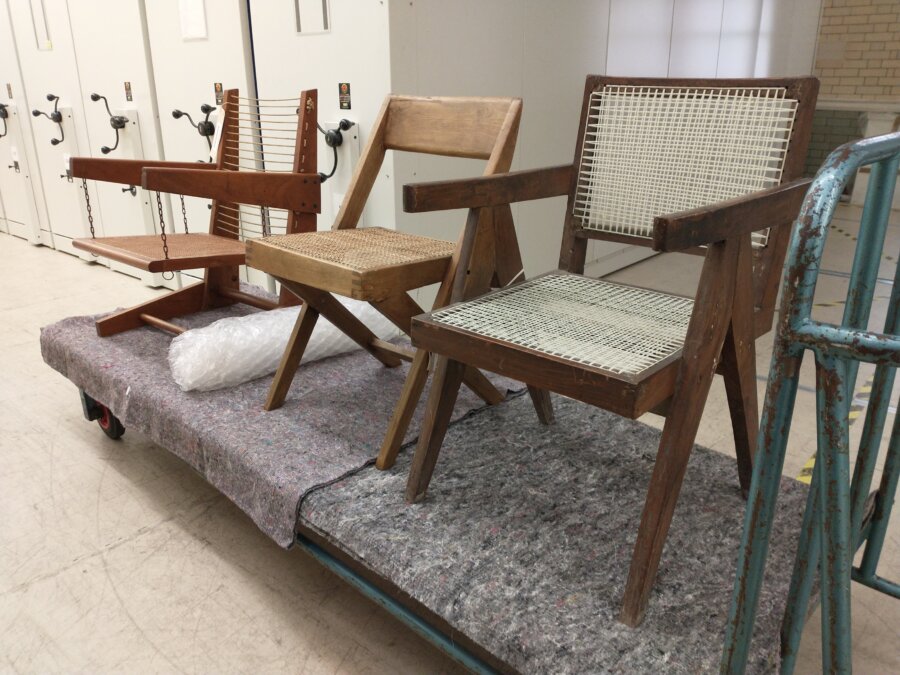 What is the field of Design History today?

What values does it espouse, embody, and represent?

What values should the field embody?

These are a few of the foundational questions behind the collaborative Chandigarh Chairs project on which, together with co-researchers Nia Thandapani and Gregor Wittrick, I presented on at the 2021 DHS Memory Full? Conference.

Modernist furniture from the Indian city of Chandigarh has exploded in international fame and popularity over the last decade. From initial origins and uses within Chandigarh’s municipal buildings, these chairs, tables, desks and charpoi can now be found in the homes of the rich and famous, and featured in full-page spreads within the world’s leading design publications. But despite their fame and exorbitant financial value, surprisingly little is actually known about these pieces; about their design, manufacture and use within India for over forty years.


The Chandigarh Chair project seeks to fill in gaps in the internationally known story of Chandigarh’s modernist furniture, while at the same time critically examining precisely what information about these modernist designs are widely known, and how this constructed narrative was built and disseminated. For the Chandigarh Chair project, the theme of Memory Full? seemed a remarkable fit; an opportunity to explicitly probe the ways in which the memory of designed objects, such as Chandigarh’s modernist furniture, can be, and is, deliberately constructed vis-à-vis systematic power imbalances, such as neo-colonialism and extractive global capitalism.


This initial impression of fit was in many ways proved correct at the get-go; Memory Full? was opened by Ahmed Ansari, student-curated Keynote Speaker, with his paper ‘Decolonisation, the History of Design, and the Design of History’. Ansari kicked off the conference on a spectacular note, reminding us that designed objects, the practice of design, and the study of design history, are fundamentally and inherently political. Further, Ansari argued that as design practitioners and design historians it is our moral duty to address the politicality of design head on. Perhaps most saliently to the material of the Chandigarh Chairs project, Ansari addressed the intersectionality of oppression within and related to design, powerfully stating that ‘Anticoloniality without anticapitalism means nothing’. Ansari’s vocalization of the ties between capitalism and colonialism could not have been more relevant to the Chandigarh Chairs project as a whole, and our presentation at Memory Full? in particular.

In this talk the Chandigarh Chairs team questioned the now hegemonic narrative of Chandigarh’s furniture – that their designer was Pierre Jeanneret, that they were "saved" by the French dealers, and that they should sit among other financially valued objects within the Western canon of Modernist design. Further, we suggested that such a narrative emerged from, and is continued through, colonial power structures and does not accurately represent the historical reality of the furniture’s design, production, consumption and re-sale. We argued that the absence of solid, provable, and specific evidence has encouraged the propagation of a Western-focused narrative of Chandigarh’s furniture, which has created significant blind spots in its popular history, and risks overwriting the memory of the chairs’ Indian context of creation and use.

Outside of the panel within which we presented our Chandigarh Chair project (Histories of Deconlisation and Repair), Ansari’s call to arms was picked up elsewhere within the conference, in the Pedagogies of Unlearning panel, and in Paul Soulellis’ fascinating dive into zines and phamphleting in ‘Urgentcraft: Radical Publishing During Crisis’. The content of these talks reminded listeners of the radical history of designed objects, while keeping one eye toward the future, toward the potential of both design and design history to help us rethink the present and forge a better, more equitable future.

However, such radical approaches to design history, and to the study of design and designed objects, were not always echoed – while interesting and scholarly, much of the content at Memory Full? remained quite traditional, staying squarely within the well known design-production-consumption paradigm.

In sum, Memory Full? reinforced the schism which appears to exist within Design History; of a discipline unsure of its relationship to the political, to the radical, to the decolonial, to the anticapitalist and to a critical approach to history, theory, and objects.

The current state of popular design history, and design history as it is presented to the lay-public, lays bare the need for such an approach. On the final day of Memory Full?, two thirds of the Chandigarh Chairs team visited the Charlotte Perriand: The Modern Life exhibit at the Design Museum, London. Although beautiful and impeccably designed, the show stopped short of interrogating the personal actions of Perriand (such as her seemingly unquestioning residence in WWII era Imperial Japan), nor did interpretation probe the way in which her pieces rose to popular knowledge and prominence (in part through the interference of the very same furniture dealers responsible for the extraction and marketing of Chandigarh’s modernist furniture). As Ansari and so many presenters within Memory Full? highlighted, approaches like this which do not interrogate and have little engagement with the difficult, challenging, and political implications of design, designers and design history leave us with an incomplete knowledge and understanding of all three.

I am grateful for the support of the Design History Society in attending Memory Full? – this proved to be an experience which both reinforced the crossroads at which the field finds itself, and the incredible work being done to chart the way for the future of the discipline.