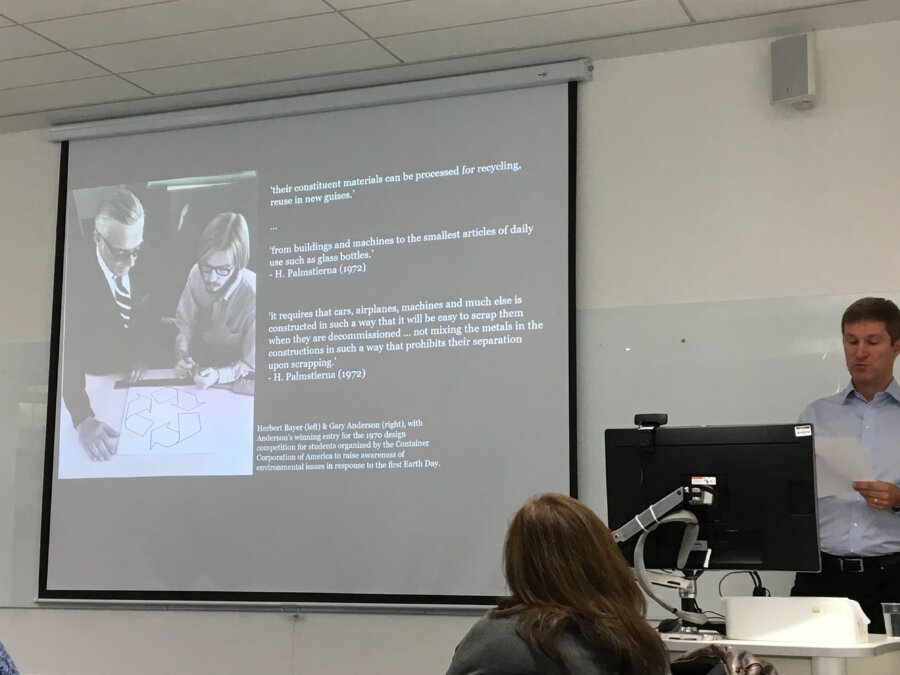 In one of the 2019 DHS Conference’s keynote addresses, “Fixing Liquidity: Making Change Reasonable,” Professor Guy Julier questioned whether design history can function as a form ofactivism. A similar query arose in the keynote discussion between Aric Chen and Dr. Alice Twemlow, “The Cost of Curating,” in which Dr. Twemlow questioned whether curation operates as a form of critique or activism. Quoting Ben Highmore’s assertion that description itself is a political act, Dr. Julier appeared to answer his own question in the affirmative. By simply describing the events of the past, design historians (or curators) can operate as activists, lobbying for systems more politically or socially progressive than the ones they document and explicate.

While Dr. Julier’s address provokes many questions about the measures and limits of history writing as a political act, it also raises an opposing question: can design history not function as a form of activism, especially when dealing with the fraught subject of design and economics? In light of a broader move towards affirming scholarly subjectivity and positionality—and in the context of a highly polarized political climate—can design historians afford, from a practical, professional, or moral standpoint, to avoid taking an activist stance? And does such an avoidance necessarily constitute a form of complaisance or complicity?

The prevalence of papers at DHS 2019 focusing on the social, political, and environmental “costs” of design would seem to affirm design historians’ obligation not only to address, but to foreground such issues in their research and writing. In her paper “Guns and Gloves: Hand and Machine Manufacture, the Price of Design and the Cost of Design,” Professor Grace Lees-Maffei argued that while the shift from hand to machine production resulted in lower prices for many consumer goods, it also engendered costs in addition to those on price tags. Using the entwined examples of guns and gloves, she speculated about some of these added costs, such as the normalization of certain sinister ideologies (e.g. America’s gun culture) or the incapacity to accommodate difference (e.g. of those with physical disabilities). Professor Lees-Maffei effectively called for a reassessment of design’s role in exacting unwanted costs on the consuming public.

The environmental cost of design was the subject not only of a session by that name, but also of several other papers concerned with the ecological consequences of designing for industry. Dr. Daniela Prina’s paper, “From La Maison to Environment: the struggle for design, architecture and ecological quality in Belgium (1945–1970),” helped historicize the very concept of environmentalism. From a mid-century desire for “beauty for all” to a 1960s battle for better urbanism, Dr. Prina showed how our attitudes towards the environment are contingent on the conditions in which we live. In “Design’s Ecological Restraints: Hans Palmstierna and Sweden’s Environmentalist Awakening,” Professor Kjetil Fallan elaborated on a period during the late 1960s and 1970s when an interest in protecting the environment expanded into a global issue of survival. The resulting notion that reuse and recycling should be supported not out of economic necessity, but rather ecological responsibility, remains a viable mandate for today’s designers and executives.

Dr. Dori Griffin’s paper, “Typography, illustration, and the politics of visualizing immigration to the United States,” was a reminder of the methodological challenges raised in confronting racist, bigoted, or otherwise offensive materials. By juxtaposing anti-immigration images from a century ago with those of today, Dr. Griffin emphasized the persistence of race-based prejudices in the United States while striving to take into account their historical particularities. Her study pushes us to take seriously chauvinistic imagery that may seem farcical from a contemporary standpoint, but that can have noticeable repercussions on public policy and popular opinion, as history shows. Indeed, social media and meme culture have exacerbated these issues, transforming and propagating insidious images among ever wider publics.

These papers are only a selection of the many politically and socially engaged talks delivered at DHS 2019. This work is intellectually and politically vital, indicating one way in which our scholarship might have a life outside academia. By calling attention to impending environmental catastrophes, entrenched social inequities, and dangerous ideologies, perhaps we can help curtail them. Yet at the same time, I wonder whether the implication that design history must be activist to be impactful or consequential limits what we are able to do as historians. Put another way, what do we potentially miss when we approach our materials first and foremost from an activist stance? Are all materials suited to, or best served by, such tactics?

In “The Expressive, Expansive, Expensive Modernism of Paul Laszlo,” Professor Monica Penick offered a compelling interpretation of the Hungarian-born designer’s practice as being caught between three notable dualities: restraint and luxury; industrial and craft production; the universal and the individual. By considering the marketing strategies, clienteles, and legacies of Laszlo’s designs, in addition to the craftsmanship and aesthetic qualities of his work, Dr. Penick expands our understanding of the designer’s particular brand of luxury modernism. While Laszlo’s practice might serve as a basis for critiquing the inaccessibility of modern design, the widening of the wealth gap in capitalist societies, or the deficiencies of trickle-down economics, Dr. Penick’s thoughtful analysis reveals a great deal of nuance that complicates, and therefore enhances, such critical perspectives.

In my own work on the history of integrated design and corporate identification, I foreground the convergence of economic and social theory with design thinking in order to understand how design assumed a central organizational role in modern capitalist societies. Of course, many of the companies I consider, such as Container Corporation of America, could serve as revealing case studies of the modern corporation’s mercenary, exploitative, and colonialist agendas; I imagine and hope that such critical histories are being written. But by examining Container Corporation’s design program through the lens of integration, I aim to understand the economic exigencies, visual principles, and social realities that underpinned these agendas. Thus, while I agree that activism can and should fall within the purview of design history, I also believe there is still much more to understand about the political, economic, and ideological systems we study before we can most effectively critique them.

I am grateful to the conveners of “The Cost of Design” for the opportunity to share my work and to the Design History Society for supporting my participation in the conference with a student bursary award.