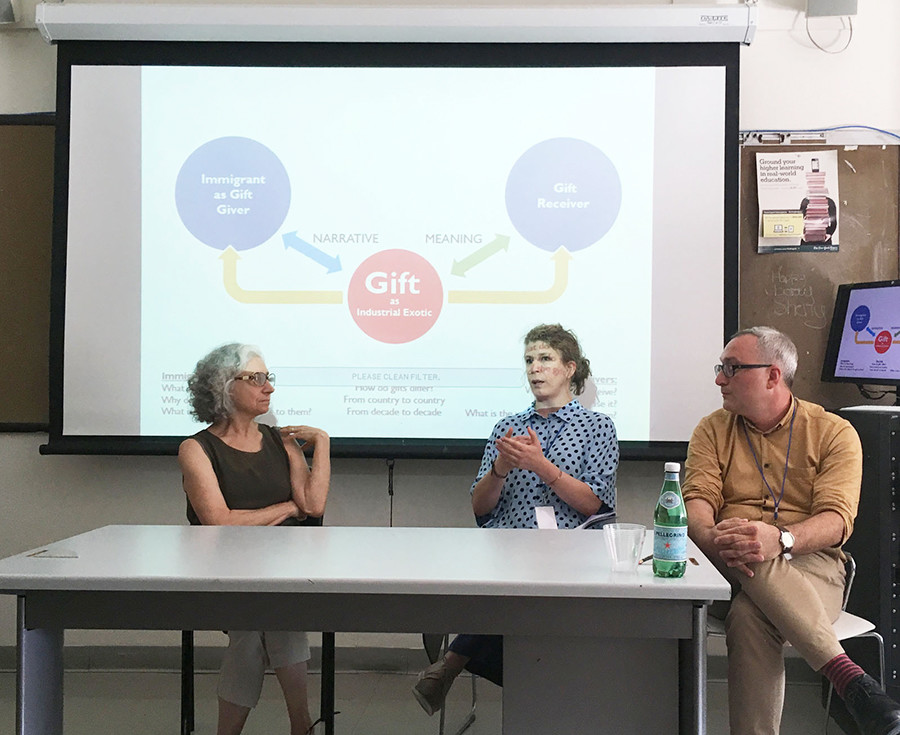 The Design History Society Annual Conference was held in September 2018 in New York at Parsons The New School on the theme of "Design and Displacement". I am very grateful to the Design History Society for allocating me a student bursary to support my attendance. It was the first time I had participated in a DHS conference. As an early career scholar focusing on the cultural value of silk practices in contemporary Cambodia and in Cambodian diasporic communities, I often find myself standing in the margins of global history and design history studies - except in the specific context of Southeast Asian-focused research groups.

I must simply begin by expressing that this conference was a great experience, which has inspired me to push my work further and to continue to engage with histories, voices and territories that, so far, have mainly remained peripheral. The many panels showcased an invaluable diversity of scholars committed to tackling crucial topics through the scope of the vernacular, the personal, the local, and the unaccounted for. The exciting combination of these complementary, overlapping and sometimes conflicting areas of scholarship provided engaging conversations: I enjoyed the opportunities offered by each paper and keynote to discuss with my peers around the theme of displacement in all its forms.

With the support of the convenor Michele Majer from Bard Graduate Center, I participated in the parallel session "The Fabric of Cross-Cultural Displacement" with two fellow recipients of the DHS Conference Bursary, Rebecca J. Keyel and Noga Bernstein. Our group shared recent avenues of research dedicated to the changing value of textiles in situations of cross-cultural displacement, which gained a positive response from a generous audience.

Additionally, I found myself to be particularly drawn to papers encompassing research methodologies of oral history, incorporating interviews and personal accounts as key findings and essential elements of study. For instance, in the parallel session "Identities: Indigenous, National, and Hybrid", design historian Javier Gimeno-Martinez focused on the Dutch souvenir gifts of white and blue ceramic figurines of a couple dressed in folk costumes. The artist Gabriela Bustamante has developed her own versions of the well-known kissing couple by introducing figurines dressed in the other cultures' stereotypical folk costumes. In his research, Gimeno-Martinez used blog posts, online articles and comments reacting to Bustamante's project to reveal the struggles and contradictions of the contemporary perceptions of Dutch people on the notion of national identity.

For his paper "Immigrant Gifts: A Material Manifestation of Immigrant Narratives", scholar Gökhan Mura started from his own experience as a young boy who had stayed in Turkey while other members of his family emigrated to other countries and would often return to visit him with gifts coming from the West. Humorously, he stated that conducting auto-ethnography was an easy and invaluable way to start, as he was always available to himself. From the perspective of the receiver of gifts, he then opened his study to the point of view of immigrants, specifically Turkish immigrants in France (2017). These testimonies helped him to highlight the reconfigured relationships to objects and gift-giving practices for the immigrants, who resort to these commodities to shape the narrative of their newly displaced lives.

I was particularly interested in the parallel session "Fashion, Recycling, and (Re)Appropriation: Global Geographies and Temporalities". Curator Leslie Rabine (above) provided a lively account of wedding rituals and fashion in Dakar, Senegal. Her presentation was based on a recent case study following a young married mixed couple. The bride, who originated from Zanzibar, had designed her own dresses 'defying traditions and embedding her different origins'. The displaced bride used ceremonial dresses and their performative power to negotiate with her feelings of being a foreigner in Dakar. Rabine grounded her approach in the personal connections she had built through time during fieldwork, willing to 'get to know people and families really well', also stating that 'it goes beyond research'.

In the same panel, fashion historian Sarah Cheang discarded the hierarchy of acceptable fashion, good and bad taste, original and copy, ethnic and appropriated style at the very beginning of her presentation "Chinese Dress and Fashion Histories: Flotsam, Jetsam and Lagan". Through the recollection of her own personal memories and family photographs, and in conjunction with the study of garments found in museum collections, she invoked the sensitive intimacies of Chinese fashion in British and Canadian countries in the 1920s and 1930s. In her own words, the matter of her research remained the 'cultural fuzzy, the indeterminate, the opaque' in a context of transnational fashion.

These few papers among many exciting others were encouraging examples of the necessity to give space to alternative voices, objects, movements, processes and materials, to tell intermediary, transitory, and shifting narratives, and to re-centre the human experience. Finally, I would also like to mention the inspiring closing keynote, delivered by Paul Chaat Smith, Curator at the National Museum of the American Indian, remarkable for his blunt honesty, in conversation with Carin Kuoni from the Centre for Art and Politics at the New School. And, of course, I thoroughly enjoyed the eventful Gala Dinner, which embarked us on a magical boat trip from the Chelsea Piers down the Hudson River towards the illuminated Statue of Liberty greeting us at dusk.