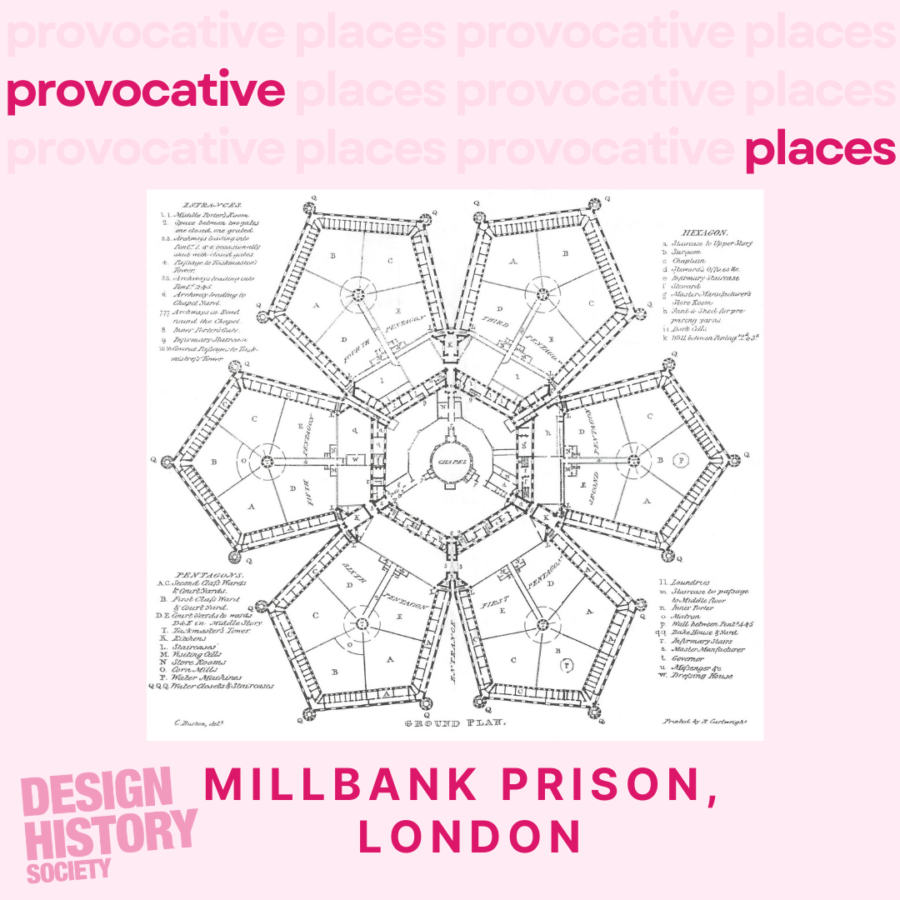 Welcome to the next in our Provocative Places and Objects series, in which our Ambassadors look at places and spaces that challenge and confront us as design historians. This month, Alexandra Banister looks at Millbank Prison, the former national penitentiary and deportation holding facility, and the architecture of imprisonment and surveillance.

Opened in 1816 and closed less than a century later, Millbank Prison was one of the most notorious prisons in British history, both in its design origins and in its many failures as a building. Intended as Britain’s new national prison, the site was purchased using government money in 1799 by the philosopher and social theorist Jeremy Bentham. Bentham hoped to use the site to realise his idea of a panopticon prison: a design which created a system of control allowing all inmates to be observed from a single viewpoint without knowing whether or not they were being watched. Although a single security guard would be unable to view all prisoners at once, the feeling of continuous surveillance created would force prisoners to constantly regulate their actions.

The panopticon plan was eventually abandoned in 1812. During the project’s next phase a competition was held for a new prison design. The competition was won by William Williams, the drawing master at the Royal Military College in Sandhurst. Contrary to the panopticon idea, Williams’ plan featured a hexagonal three-storey central courtyard housing a chapel and administrative offices surrounded by six pentagonal cell blocks, the outer corners of which housed observation towers. Constructing Williams’ design was difficult given the marshy nature of the site, which caused subsidence problems. A succession of architects were employed to find a solution, with an ambitious raft-like underpinning of the building with concrete foundations providing a resolution, despite adding considerably to construction costs. By the time of its completion, it was the largest prison in London, but had cost in the region of £500,000 – more than twice the original budget – and the equivalent of £500 per cell.

In addition to inflated building costs, the marshy site and disregard for a functional ventilation system made Millbank Prison a breeding ground for disease. An epidemic of dysentery and scurvy spread throughout the prison in 1822, which was bad enough for prisoners to be evacuated and temporarily transferred to other prisons. Williams’ complex and labyrinthine design was also challenging: the networks of corridors and identical cell blocks caused prison staff to get lost. The running costs of the prison were also unsustainable. The fact that such key design features had been overlooked meant that within decades of its inauguration, a new national penitentiary was commissioned at Pentonville and Millbank was downgraded to a holding depot for convicts ahead of their deportation to Australia. From 1870 it served as a military prison before finally closing its doors in 1890.

What lessons were learnt from Millbank Prison’s failures? Did architects of subsequent prisons in Britain consider the effects bad design can have on inmates’ physical and mental health? Was it the right decision to abandon Bentham’s panopticon concept, or did the psychological feeling of constant surveillance created by such a design infringe on an individual’s human rights? And what does Millbank Prison tell us about the history of human rights in the age of deportation?