Provocative Objects: The Pirate and The Traders of the West Indies 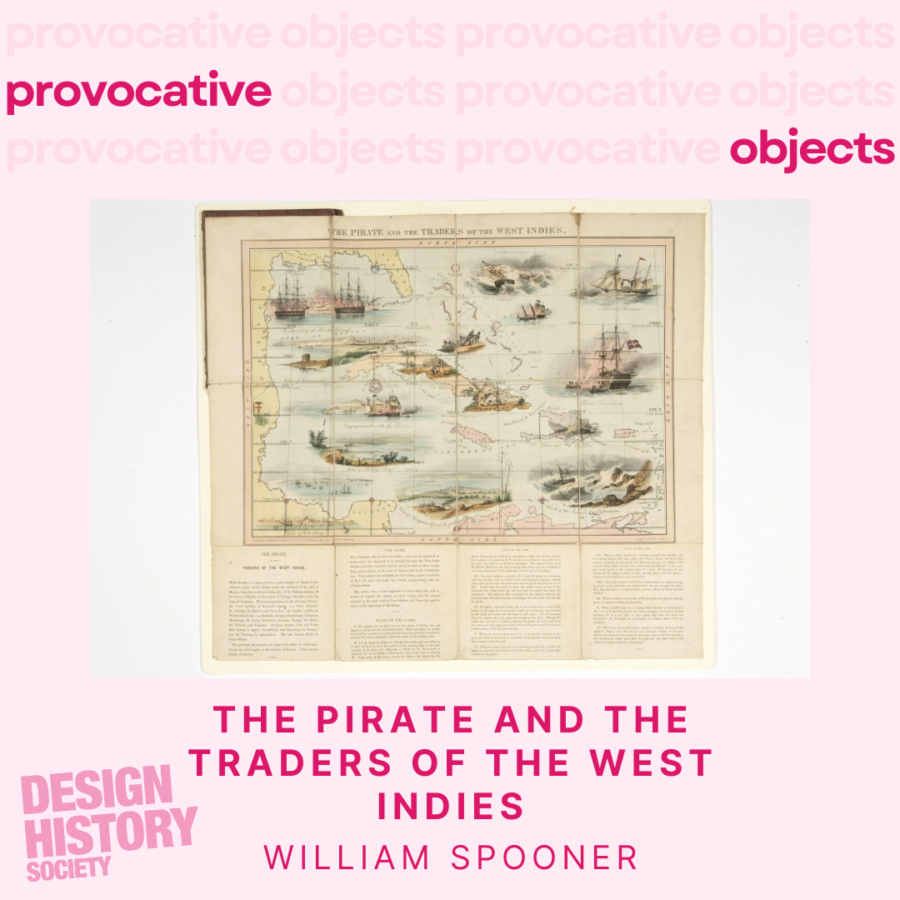 The Games We Play

This month, guest contributor to the Provocative Objects series Zarna Hart studies The Pirate and The Traders of the West Indies by William Spooner in relation to British Empire and the indoctrination of Victorian children.

In both games and empire, there is always a winner and a loser. The fictitious worlds and characters in which we inhabit weave us through stories of adventure and discovery: a tale through foreign geographies that we otherwise would not encounter. Spin the ‘teetotum’ and ‘start your voyage’[i].

The Pirate and the Traders of the West Indies is a children’s board game published in 1847 by William Spooner, a successful print-seller and entrepreneur. According to the British Map Engravers Dictionary, Spooner was also known for his ‘transformation “protean” scenes, satires, military prints, etc.’ (625)[ii]

What remains at the core of this game, however, is the place and time in which this object sits: birthed between the establishment of the Royal Geographical Society in 1830[iii] and the empirical rule over Caribbean islands by Britain during the 1900s.[iv] With the overarching romanticism of discovery, geographical knowledge and the ideals of the perfect nationalist, it is apparent through revealing evidence that this board game was a metaphorical tool for the colonial indoctrination of Victorian children.

The Caribbean: a place to reap and rape; spread across a linen rectangle and folded neatly on the bookshelf of a white British family who may never care to visit the Caribbean’s shores beyond the two dimensional experience they’ve thrown 6s towards (the equivalent of ~£18 today).[v] As put by Franco Moretti, ‘penetrate; seize; leave (and if needed, destroy). It’s the spatial logic of colonialism; duplicated, and ‘naturalised’ by the spatial logic of the one-dimensional plot.’[vi] This board game, therefore, demonstrates the way colonialism was dispatched and rehearsed by Victorian children. With trade as a packaged accompaniment to this game, it simultaneously was the engine that fueled the British Empire.[vii]

On the account of constructed geographies, it is necessary to analyse the central motif of the board game: the map of the Caribbean as the foundation of play. Displaying the Caribbean in this way almost disassociates it from its reality, but also reimagines its larger plurality within the geographical context. Maps in the context of board games serve as a ‘tight, airless worlds of move and countermove’ (Clifford Geertz, Blurred Genres, 25-26); a performative realism that goes against conventional designs of other cartographic examples of the time.

In conducting this research, I have confronted (and continue to confront) my own discovery as a Caribbean person the agency I have as a historian to vocalist our histories with intention. I identify with fellow Caribbean writers who have proclaimed their experience in the disparity between the place we call home and the telling of it, for example, in the words of CLR James, ‘what at home is the greatest virtue becomes in the colonies the greatest crime.’[viii] The colonisation of the Caribbean was a momentous period for England during the mid to late 1800s and has left its mark on methods of education, intellectual teachings and manifestations of play, such as The Pirate and The Traders of the West Indies. Not only were these markings representative of the commercial demands of Victorian society, but also inflicted an imperial system for upper-middle class children to consume and adhere to. Thus, I believe it is of grave importance that the description and portrayal of this object at the Museum of Childhood and V&A Online Catalogue be further developed so that the imperial imprint is not reductive. ‘We were condemned to be out of place or displaced, transported to a phantasmic zone of the globe where history never happened as it would.’[ix] Looking at this object from the perspective of a Caribbean historian, I am presented with an all-too-familiar rhetoric that has become part of Caribbean history.

[i] Excerpts from The Pirate and The Traders of the West Indies board games’ rules
[ii] Worms Laurence and Ashley Baynton-Williams. 2011. British Map Engravers : A Dictionary of Engravers Lithographers and Their Principal Employers to 1850. London: Rare Book Society
[iii] According to the RGS’ 50th Anniversary report, it was the first of its kind to ‘collect, digest, and publish interesting and useful geographical facts and discoveries; to accumulate a collection of books on geography, voyages and travels, and of maps and charts.’ Markham, C.R. Royal Geographical Society. The Fifty Years' Work of the Royal Geographical Society. 1881. Print
[iv] The British Empire over the West Indies began in the late 1700s and the most recent Caribbean Independence happened in the early 1980s.
[v] William Spooner advertisement, the morning post, Tuesday 7 December, 1847
[vi] Moretti, Franco. Atlas of the European Novel 1800-1900. P.62. London: Verso, 1999.
[vii] According to Linda Colley, ‘trade was not only an indispensable part of the British economy, but also vital for the state’s revenue and naval power. In return, traders depended on the state for maintenance of civil order, for sympathetic legislation, for protection in peace and war, and for access to captive markets overseas.’ (71)
Colley, Linda. Britons: Forging the Nation 1707-1837. New Haven and London: Yale University Press, 1992.
[viii] James, C.L.R. The Life of Captain Cipriani: An Account of British Government in the West Indies, with the Pamphlet the Case for West-Indian Self Government. Durham: Duke University Press.
[ix] Hall, Stuart. 2017. Familiar Stranger: A Life between Two Islands. Chat 3. P.61. London: Allen Lane.