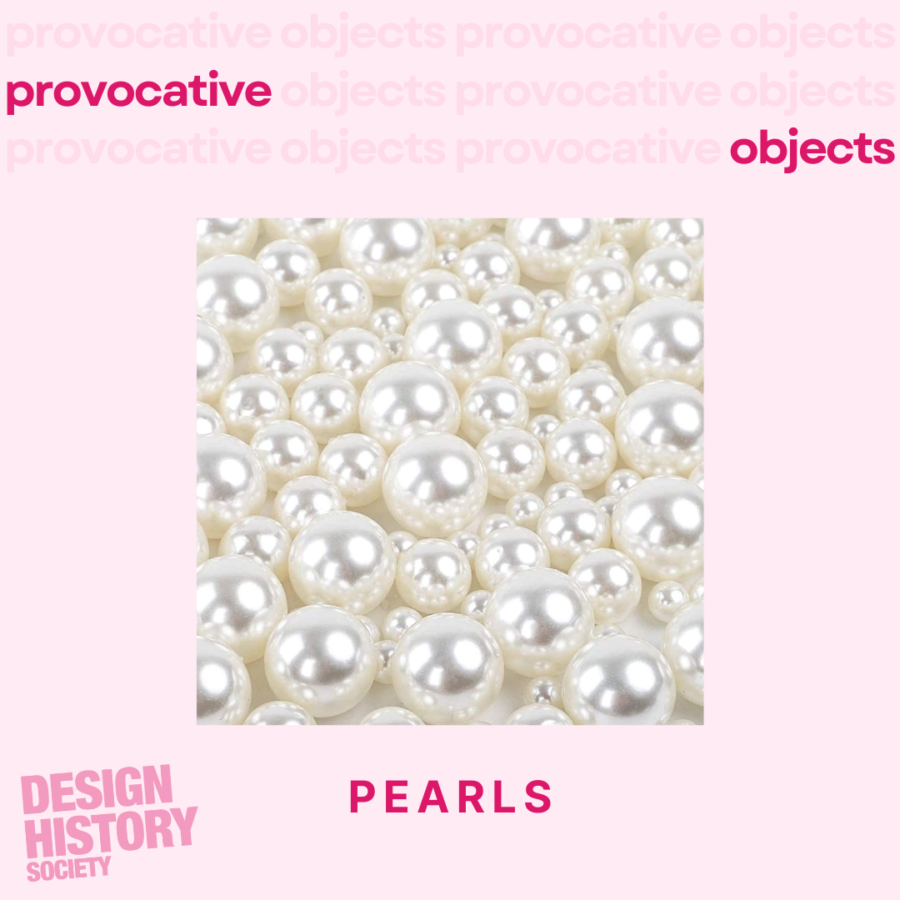 Clutching their Pearls: The Haptic, Tactile, and Embodied Experience of Pearls

To self-fashion or adorn oneself speaks to a fundamental human need to identify and define oneself through what Joanne Entwistle termed “a situated bodily practice.”[i] Fashion exists as a part of a cultural system and an innate need to perform, but an individual’s attraction to what they drape and adjoin to their bodies arises from a complex mixture of societal meanings and the alluring attraction to a materiality. Such is the case of the pearl—an object desired for its dichotomy of semiotic and haptic enticement. Jewellery intimately approaches the body, putting itself in conversation with every curve of its shape and essence of the skin. It is made to be worn upon the body, to touch the skin, to be felt. Pearls elevate this inexplicable relationship in the very essence of its materiality. We imagine a pearl as a perfect sphere of pure whiteness covered in a holy pearlescence with a sublimity cemented by its uninterrupted smoothness. It comes to exist through immaculate conception that transforms the fleshy mollusks and nacreous shell into a womb that births perfection. Without regard to the inaccuracy of our enduring perception of the pearl’s perfection, the object itself as adornment contextualizes these cultural and visual evaluations “that become objectified in the gem’s materiality.”[ii]

Existing at the margins of the body and the self, the direct contact of the pearl necklace with the skin makes the possessing, wearing, and interacting with this jewellery an embodied practice imbued with unstable meanings across time and space. Strung in coordinating accession, a string of pearls traces the temples of Renaissance queens, twentieth-century debutantes, and post-modern celebrities alike. Since the innovation of imitation pearls created by the human hand in the eighteenth century, they grace the bodies of all sectors of society in everyday negotiations of the outward self. Pearls can be simultaneously erotically charged and purity incarnate. These emblems of primness, respectability, and status have long stood in for the erotized female body. Venus emerging naked as a pearl from a shell features prominently throughout history’s visual repertoire. Cleopatra’s ingestion of one of the largest pearls in history connects women’s ordained role as producers (of offspring) and women’s condemned predilections as conspicuous consumers whose profligacy is “literally cannibalistic.”[iii]


Layered on top of these mythologizations of the pearl and the female is the metonymical linkage of the pearl to virginity. Christianity employs the pearl as a proxy for the body of Jesus in the early Christian Era, resulting in Mary’s virginity being symbolically visualized through the pearl and its shell. A woman holding a broken string of pearls in an early modern painting suggests the rupturing of chastity. Queen Elizabeth I sumptuously festooned her body in layers of pearls to connote her virginity, both of which she wielded in an expression of political agency. In eighteenth-century Van Dyke portrait conventions, a set of hands grabbing at a pearl necklaces hints that the viewer may be in the throes of undressing, emphasizing the tenuousness of her fashioning and “imbues [her] gestures with new salaciousness.”[iv] Maria Pointon put the effect of this equation best: “it may be this material relationship between necklace and body—stone touching flesh—indicative perhaps of the instability of femininity, as well as the issue of financial and sentimental investment…but also acts a trope for the drive to connect at the level of fantasy.”[v]


The fantasy of the female body as synonymous with the chaste and erotic pearl further extends to the metonymic conflation of the pearl to bodily fluids. This visceral conflation produces a tactile attraction by proxy of its nebulousness. The semantic porosity between pearls and the body is thus elevated by pearls’ concurrent hardness yet liquidity and reflected in their connection to tears and semen. The interconnection between pearls and semen became culturally explicit in the twenty-first century by the naming of the sexual act of a “pearl necklace,” linking their white translucency and haptic placement on the décolletage. The human skin and the gems of jewellery, however, normally exist in contrast because “jewelry also stages through metonymy the disjuncture between the timeless perpetuity of gemstones and the frailty of human flesh.”[vi]

Jewellery outlast human life and moves from one body to the next, taking on new transitional meanings of the future moments as it goes and often transforming in construction and design. For all its presupposed perfections, the immortality of jewels escapes the pearl. The same fragility riddles the pearl as the human skin. Humanity, pearls, and fashion thus remain stuck in concurrent cycles of impermanence.


The pearl exists as one of the unquantifiable fashionable objects mediating our sensory experiences. Still, its cultural associations elevate it to a position of a body-like thing that can temporally stand-in for the human form itself, blurring the distinction between the self and fashion. Our sensory and conceptual entanglement with the pearl resonates in its enduring relationship to our embodied situated practices of self-fashioning across history.[vii]

While it ebbs and flows in popularity as any material embedded within a fashion system, the pearl’s desirability endures and continues to be transformed in the different contexts it appears. The perfection of the process of creating fake pearls in the late nineteenth century only further cemented its timeless stamina. The resulting trick to tell if a pearl is fake is by scratching it with one’s teeth bespeaks the rooted connection to the haptic body. Pearls as objects imbued with pulchritude and desire edify as the layers of transitional and often paradoxical meanings. Built upon its idealized sensory attraction, societies’ fetishistic zeal for pearls promises their enduring role in affecting how others interpret the adorned body and how the individual body feels while self-fashioning. Whether real or fake, perfect or imperfect, fashionable or dated, transgressive or normative, pearls have an undeniable permeance as an object of value with acute proximity to flesh.