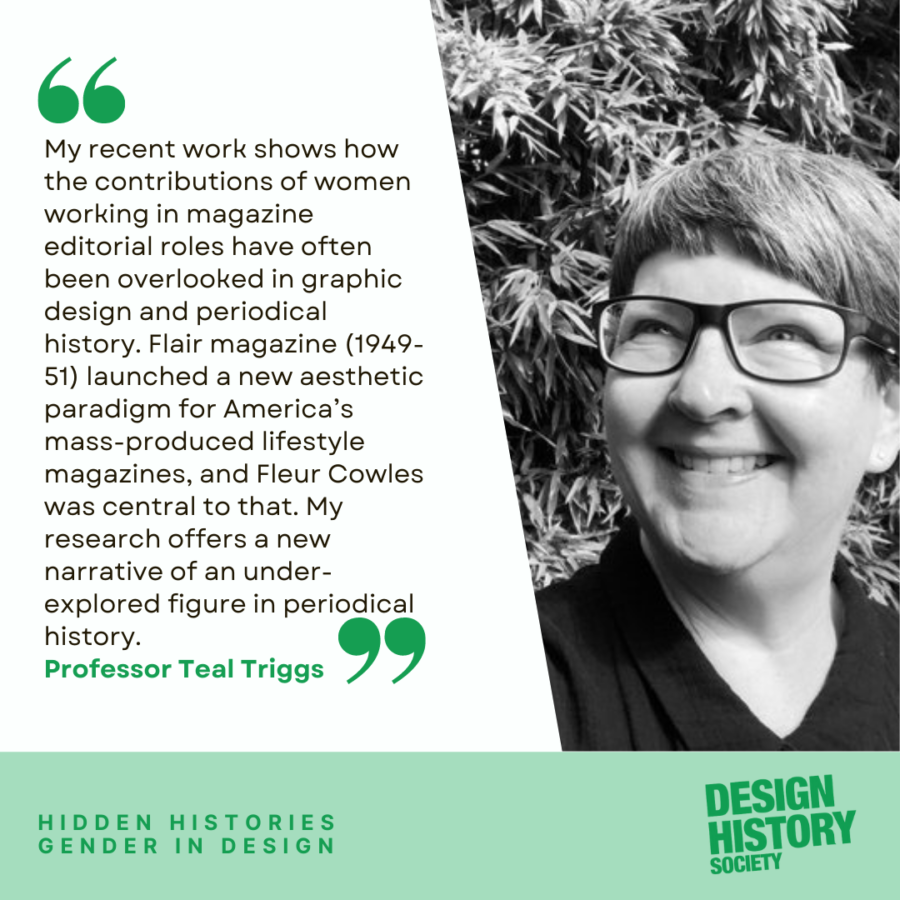 Dress and graphic design is the focus of our Hidden Histories: Gender in Design seminar this week. Ahead of her paper on Fleur Cowles’s editorship of Flair magazine, Teal Triggs, Professor of Graphic Design at the Royal College of Art, co-editor of Design Issues, and founder member of the Women’s Design + Research Unit, spoke to our Ambassador Alexandra Banister about her research.

To attend the seminar on Thursday 5th May, please register for free via Eventbrite: https://www.eventbrite.co.uk/e/hidden-histories-gender-in-dress-and-graphic-design-tickets-305610829217?aff=ebdsoporgprofile

Alexandra Bannister: What is your background and how did you develop an interest in design history?

Teal Triggs: I trained as a graphic designer and photographer in the US before embarking on postgraduate studies in graphic design history, mainly in London. The early 1980s was a time when design history was in its nascent stages and when women in graphic design were often overlooked in the writings in the field. As a female designer, I wanted to know more about the 'who, what, where, when and why' of the history of my profession; as a historian I began to question the existing canon of graphic design.

TT: My research focuses on graphic design history and feminist practices. In the past I have focused on experimental typography, comics, fanzines, and children's books. Today, I am researching the pioneering work of American magazine editor Fleur Cowles to explore curatorial patronage and how her publication Flair became a node around which creative networks were formed.

TT: My recent work shows how the contributions of women working in magazine editorial roles have often been overlooked in graphic design and periodical history. Flair magazine (1949-51) launched a new aesthetic paradigm for America’s mass-produced lifestyle magazines, and Fleur Cowles was central to that. My research offers a new narrative of an under-explored figure in periodical history.

TT: Fleur Cowles and her art directors made a design feature out of die-cuts and pop-ups in Flair magazine. It was a high-end magazine, but even so, this kind of design was very unusual and ambitious. It made a connection with the implied readership's cultural capital, which was rooted in a white, middle class, urban, educated milieu. But it was also a lot of fun.