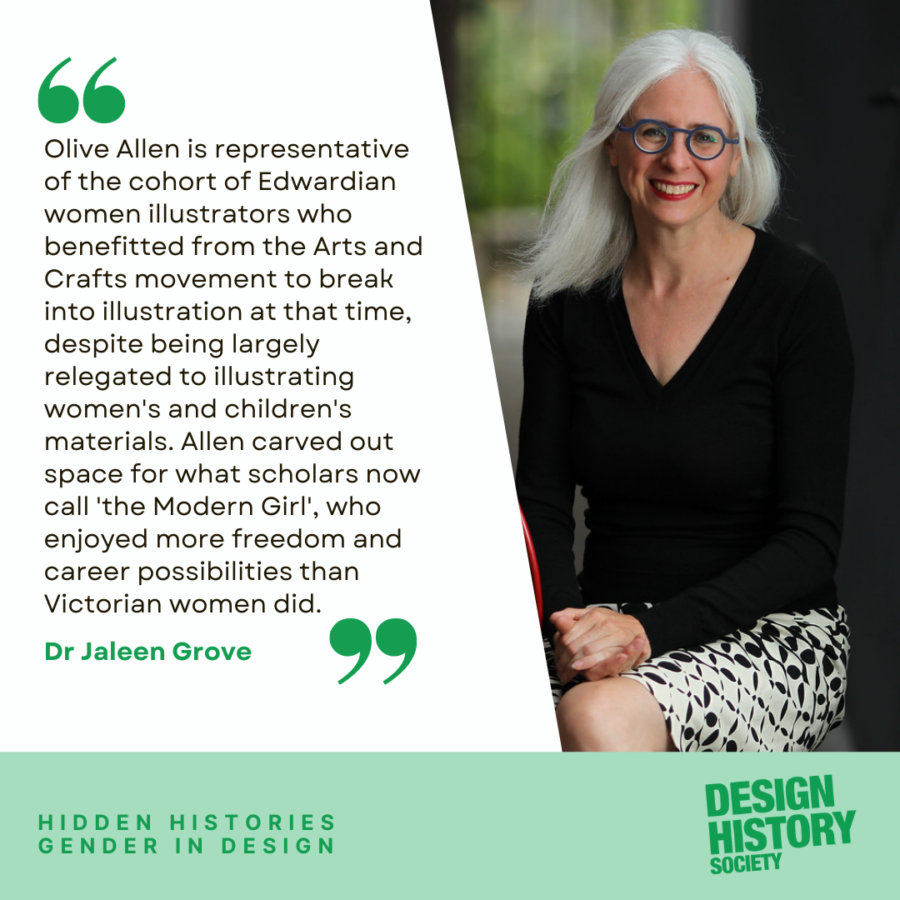 Dress and graphic design is the focus of our Hidden Histories: Gender in Design seminar this week. Ahead of her paper on Olive Allen and Edwardian girls’ media, Dr Jaleen Grove, Assistant Professor in Illustration at the Rhode Island School of Design and Associate Editor for the Journal of Illustration, spoke to our Ambassador Alexandra Banister about her research.

To attend the seminar on Thursday 5th May, please register for free via Eventbrite: https://www.eventbrite.co.uk/e/hidden-histories-gender-in-dress-and-graphic-design-tickets-305610829217?aff=ebdsoporgprofile

Alex Banister: What is your background and how did you develop an interest in design history?

Jaleen Grove: I started out as an image-maker in painting, illustration, and graphic design, and after 15 years of that I went into academia and emerged as a historian specialising in illustration. I was originally motivated to do history and visual studies to get to the bottom of why illustration was so often relegated to a very poor status among the visual arts despite providing some of the most beloved and/or most challenging imagery of all time. It's impossible to categorically dismiss illustration due to the vast number of specialisations under the umbrella of 'illustration', yet this still happens.

JG: While I have made some in-depth studies on specific illustrators, such as the Canadian artist Oscar Cahén, my interests range beyond biography to cultural identity, nationalism, the portrayal of women, contemporary practice, illustration research, and image-text analysis. I'm always interested in illustrators' social impact and capacity to perpetuate or challenge norms.

JG: Illustration partly birthed what is now called graphic design, a linkage that is somewhat overlooked, although some illustrating is usually included in design histories. I wanted to participate in this series because of that sharedness, and to highlight that illustrators – properly used – are originators of design content and not just servants of other designers. The research I will be specifically discussing in Hidden Histories is the life and work of Olive Allen (later married name, Biller), who is representative of the cohort of Edwardian women illustrators who benefitted from the Arts and Crafts movement to break into illustration at that time, despite being largely relegated to illustrating women's and children's materials. Allen, like many others, carved out space for what scholars now call 'the Modern Girl', who enjoyed more freedom and career possibilities than Victorian women did.

JG: The Girls' Realm was a sophisticated periodical for teens and young women that ran proto-feminist articles and career advice, as well as fiction and single panel gag cartoons. Among many contributions, Olive Allen wrote and drew a cartoon series titled Gems From a German Grammar Book (1903). Drawn in a flattened, modern space, a boy and girl enter a room where another girl is writing at a desk, one of her inkpots spilling. All three wear Early Victorian costumes. The gag is a non-sequitur: 'Has your cousin any relations or friends?' / 'No, but she has a china ink-stand.' It is notable because such inscrutable humour was hardly thought appreciated by mere girls according to the standards of the day. It also pointed to the high education now attainable by young women, such as Allen herself received at the boarding school operated by her mother and elder sisters. The reader of the magazine was intellectually challenged rather than pandered to, in both form and content.