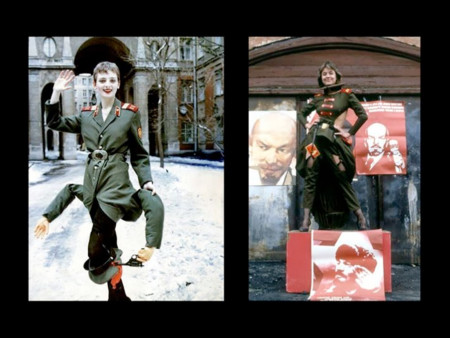 Join cultural historian David Crowley to examine the legacy of the Soviet avant-garde in fashion and film design in the second part of the Imagine Moscow Lecture Series.

The October Revolution represents one of the most significant moments in our architectural and design history. Now one hundred years on, this lecture series explores the design and wider cultural context of that time, as well as its impact on the present.

The October Revolution was a one-off, world-changing event and yet it was revived obsessively throughout the history of the Soviet Union. Perestroika and glasnost - last-ditch attempts to save the Soviet system - were presented as a revival of the Leninist spirit. In this talk, cultural historian David Crowley will explore the ways in which the revolution and, in particular, the language of the Soviet avant-garde of the 1920s, was remembered and recycled in Eastern Europe in the last decade the communist rule in the 1980s in ironic fashion parades, 'de-constructivist' paper architecture schemes, and even pop music videos.