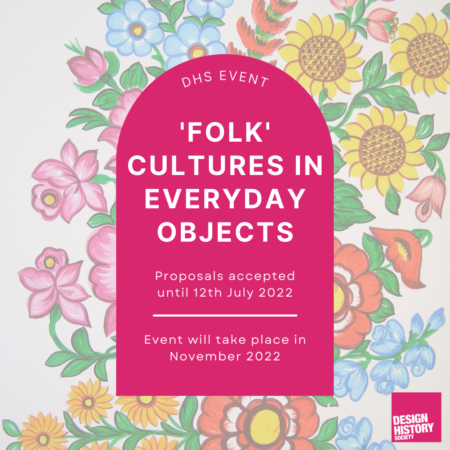 ‘Folk’ is a contested term, invoking resonances of tradition, rurality, informality. Its forms and connotations have often infused everyday objects with contested significance. References to particular forms and imaginings of folk culture vary from homage and emulation to unexpected juxtapositions, translations, mis-quotations and appropriations. Who had agency in the design and manufacture of these objects as well as those who circulated and mediated them to multiple audiences who consumed them inflects these objects with complex and contested power dynamics and impacts.

Proposals are invited that explore how folk cultures inhabit the design and production of everyday objects critically assessing how and why these intersections operate. The DHS welcomes a diverse range of speakers from anywhere in the world.


As inspiration for proposals, these themes might be generative:

- How has the concept of ‘folk’ culture been formulated in design and craft writing?
- What connections and tensions pertain amongst terms such as ‘folk’, ‘indigenous’, ‘traditional’ etc.?
- In what ways have folk traditions had an impact on the design of everyday objects?
- How might the popularization of folk forms adapted and changed in a particular object be researched?
- Which object typologies particularly embrace folk forms, which do not and why?
- What new significations are created, transformed, or lost by adaptations of folk forms in everyday objects?
- What new relationships does the translation of folk forms and typologies into mass production create?
- In what ways are particular social, geo-political, technological contexts entangled in the adoption, adaptation, neglect, or rejection of folk cultures?
- How has the intersection of folk forms and everyday objects affected their circulation, consumption and mediation?


Each speaker will give a 10-minute presentation illustrated by 3 PowerPoint slides, followed by a discussion with all participants facilitated by the co-convenors, DHS Ambassador Wiktoria Kijowska and Claire O'Mahony, Chair of the Society. To encourage dialogue by the most equitable, sustainable and dynamic means, speakers and participants will meet through Zoom in ‘real time’. The event will take place in mid-November 2022, depending upon the submissions either in the form of a single virtual symposium or several events.

Please submit via email to the DHS Administrator, Jenna Allsopp (designhistorysociety@gmail.com) by 12 midnight on Tuesday 12 July 2022:

- an anonymous proposal of a maximum of 300 words in English.
- a separate document a 100-word biography with an email address where we can contact you.

The programme will be announced in mid-September.