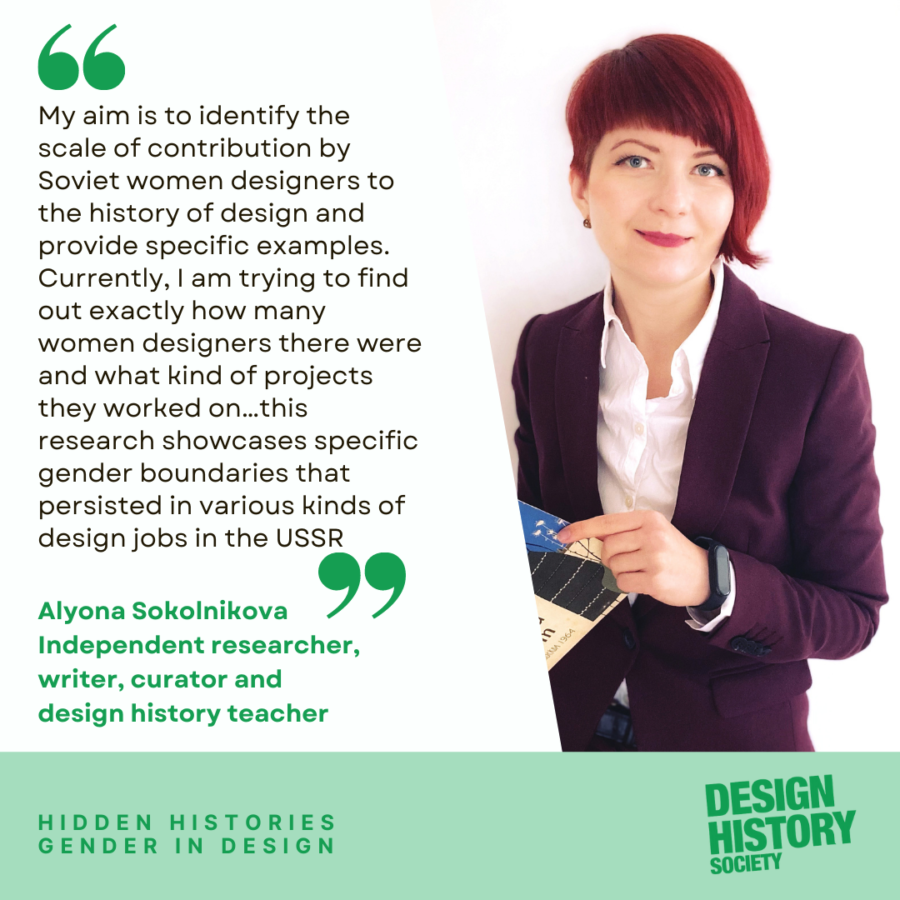 This week’s Hidden Histories: Gender in Design seminar looks at design amidst the Cold War. Alyona Sokolnikova, independent researcher, writer, curator and teacher, and founder of the Women Designers: USSR research project, spoke to DHS Ambassador Alexandra Banister about her work on women designers in the Soviet Union, 1960-1980.

To attend the seminar on Thursday 19th May, please register for free via Eventbrite: https://www.eventbrite.co.uk/e/gender-in-design-hidden-histories-of-design-amidst-the-cold-war-tickets-305676706257?aff=ebdsoporgprofile

To find out more, follow Alyona on social media:


Alexandra Banister: What is your background and how did you develop an interest in design history?

Alyona Sokolnikova: Back in Moscow (2001 – 2007), design history was my favourite class in college. This was when I realised that Soviet design history was much underrepresented in Russian and internationally-published coursebooks. My research aims to fill these gaps and put Soviet design history in an international context. Another major issue is decolonising Soviet studies, which will be impossible unless we closely cooperate with our international counterparts. In my PhD thesis (2011) I explored the complex nature of national identity in design that stems not only from the local context, but is also largely influenced by cross-cultural exchange. This also works the other way around, as local trends travel across borders and contribute to the international design discourse. I try to combine academic and research work with teaching and curatorship so that I can share the insights with a wider audience and make the process as interactive as possible.

AS: My aim is to identify the scale of contribution by Soviet women designers to the history of design and provide specific examples. Currently, I am trying to find out exactly how many women designers there were and what kind of projects they worked on, based on mentions in industry journals, such as The Technical Aesthetics, The Decorative Arts of the USSR and The Architecture of the USSR and a series of personal interviews with 20 Soviet women designers taken between 2012 and 2021 in Moscow and St Petersburg. This research demonstrates that the number of female design professionals working in the Soviet state-owned institutions was increasing from the 1920s to the 1990s. It also showcases specific gender boundaries that persisted in various kinds of design jobs in the USSR.

AS: Achievements of Soviet women in art and design are relatively poorly covered in professional and popular scientific literature. The goal is not only to reveal new names and give credit to overlooked projects, but also to dwell on the factors that reduced the ‘visibility’ of women in Soviet design, such as group authorship and lack of capacity to implement projects. The research became a very personal project for me, because I started it when I took my maternity leave. The stress of combining my professional and parental roles made me constantly think of the gender-related difficulties the Soviet women designers were faced with, and also of the career opportunities that my daughter will have. I got lots of support, both personally and professionally, from my mother, Dr Natalia Sokolnikova, herself an art and design historian and teacher. So for me, this was in many respects a family project.

AS: I happened to interview Tatiana Samoilova (b. 1939), a prominent Soviet designer, who worked at the Leningrad branch of the All-Union Scientific Research Institute for Technical Aesthetics (1962-1995). Her concept of the Major-Domo smart desk clock was perhaps the most ambitious of her projects. It was developed as a part of the VNIITE Watches&Clocks-90 project (1985-89) and had three programmable clips that helped organise the schedules of family members. The wearable clips were to be used as timers with sound signals and could be attached to various surfaces, including clothes. The clock also had a number of other useful features, such as a calculator and humidity and dust sensors. Unfortunately, the design never made it to production, but we made a replica that is now part of the travelling exhibition Here We Are! Women in Design 1900 – today by the Vitra Design Museum.